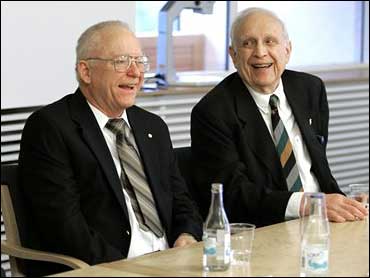 "There is a measure of denial of scientific evidence going on within our administration, and there are many scientists who are not happy about that," said Roy J. Glauber, who shared this year's physics prize with fellow American John L. Hall and Germany's Theodor W. Haensch. Their research on the quantum nature of light has resulted in more precise optical clocks and measuring systems, and is used in today's satellite positioning systems.

Glauber also said some U.S. Congress members are more concerned about the political consequence of research projects than their scientific importance when they decide where to allocate money.

"(The projects) are not evaluated scientifically, they are only evaluated politically," Glauber said, but did not give details on specific projects. He spoke at a news conference after the three physics laureates gave a lecture to students and fellow researchers at Stockholm University.

Hall agreed that the attitude toward science in the Bush administration "does not go in the right direction."

"I think to put a gloom and doom spin on it is probably a little bit of overreacting, but it is a worrying time," Hall said.

A large part of the U.S. scientific community has accused Mr. Bush of spending too little on research and appointing people who are not qualified for top government science positions.

Administration officials have dismissed such concerns as misguided and accuse some scientists of playing politics, of attempting to undermine Bush administration policies by claiming they are based on bad science.

All five of this year's American Nobel laureates met with Mr. Bush at the White House in November, but Glauber said the meeting did not focus much on science.

"He didn't seek or ask our advice on any issue as far as I can remember," Glauber said.

Nobel Peace Prize laureate Mohamed ElBaradei, meanwhile, arrived in Oslo, Norway, to accept the award he shared with his International Atomic Energy Agency for their drive to curb the spread of nuclear weapons.

"Our work is crucial to our survival, and I think the Nobel Prize is a shot in the arm for us," ElBaradei said.

Speaking of the Iran's nuclear program, ElBaradei said there was still time for dialogue.

"The Iranians are getting the message clearly: That the world is concerned about their nuclear program, that they need to show more transparency," he said.

In a special Nobel lecture on Wednesday, literature laureate Harold Pinter slammed Mr. Bush and British Prime Minister Tony Blair, saying they should be prosecuted for the invasion of Iraq.

The Nobel Prizes in physics, chemistry, medicine and literature and the Nobel Memorial Prize in Economic sciences will be handed out Saturday in Stockholm. The Nobel Peace Prize will be presented on the same day in Oslo.