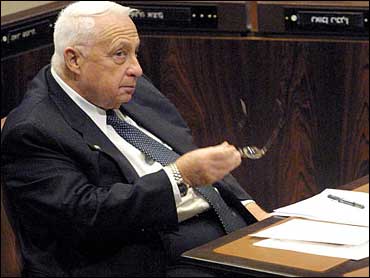 The Belgian Supreme Court threw out an appeal by a group of Palestinian victims Wednesday to try Israeli Prime Minister Ariel Sharon for war crimes under a 10-year-old law by which international leaders can be indicted.

The final court of appeal backed a ruling of a lower appeals court which dismissed the case on technical grounds last June. It argued Sharon did not live in Belgium and could not be tried for war crimes and also enjoyed diplomatic immunity as the head of the Israeli government.

Meanwhile, CBS News Correspondent Robert Berger reports Israeli troops are again patrolling Manger Square in Bethlehem, after an army officer was killed there by a Palestinian sniper. The ambush occurred outside the Church of the Nativity, the traditional birthplace of Jesus. The army says soldiers were checking a suspicious vehicle when the gunman opened fire from a nearby alley, and then escaped. Troops imposed a curfew on Bethlehem, and were searching house to house for the assailant.

In other overnight violence, Israeli soldiers shot and killed an 8-year-old Palestinian boy in the West Bank and two armed Palestinian infiltrators in the Gaza Strip.

Israel's full closure on the West Bank and Gaza Strip, amid warnings of Palestinian terrorist attacks, prevented many family gatherings for the Eid al Adha holiday. To make matters worse, the conflict has devastated the Palestinian economy, so the traditional holiday lamb is missing from many tables.

Israel said it tightened travel restrictions — despite initial intentions to ease them — due to intelligence warnings that Palestinian militants were planning suicide attacks in Israel.

In Bethlehem, the Palestinian sniper opened fire late Tuesday on an Israeli military jeep on patrol near the church, which marks the traditional birthplace of Jesus. The army said soldiers were checking a suspicious vehicle when a Palestinian fired from a nearby alley and killed the officer.

Palestinian residents said the officer was standing just in front of the church. Bloodstains marked the spot where he fell, and soldiers covered the area with sand early Wednesday.

Shortly after the attack, Israeli soldiers declared a curfew, confining Palestinians to their homes. Two tanks rumbled into the biblical town, heading for Manger Square in front of the church, witnesses said.

The tanks pulled out Wednesday, though soldiers continued to patrol in armored vehicles and in jeeps.

In mid-June, Israeli forces took control of all West Bank cities and towns, except Jericho, in response to a wave of Palestinian suicide bombings.

They pulled out of Bethlehem briefly during the summer but reoccupied it in November after a suicide bomber from the town blew up a bus in nearby Jerusalem, killing 11 passengers. Several tanks entered with the Israeli troops and were withdrawn soon after.

In the West Bank town of Qalqiliya, Palestinians said Israeli troops surrounded two houses, searching for militants, and Palestinians threw firebombs at them. The 8-year-old boy was killed and nine other people wounded when soldiers fired back, the Palestinian witnesses said.

The Israeli military confirmed that soldiers shot at Palestinians who threw firebombs at them, but gave no information on casualties.

In the northern Gaza Strip, troops shot and killed two Palestinians trying to breach a fence surrounding the Jewish settlement of Dugit, the army said, adding that knives and hand grenades were found on the bodies.

Israeli and Palestinian officials have been meeting recently in another attempt to end fighting that is now in its 29th month.

Israel is proposing a phased cease-fire arrangement under which it would pull out of some West Bank towns, with Palestinian security forces taking control.

The formula has been tried in the past — including in Bethlehem — but has failed to take hold.

"Arafat never deals in planning attacks, but he sends out messages that are translated or understood as a green light for terrorism," Yaalon said in an interview with Israeli TV.