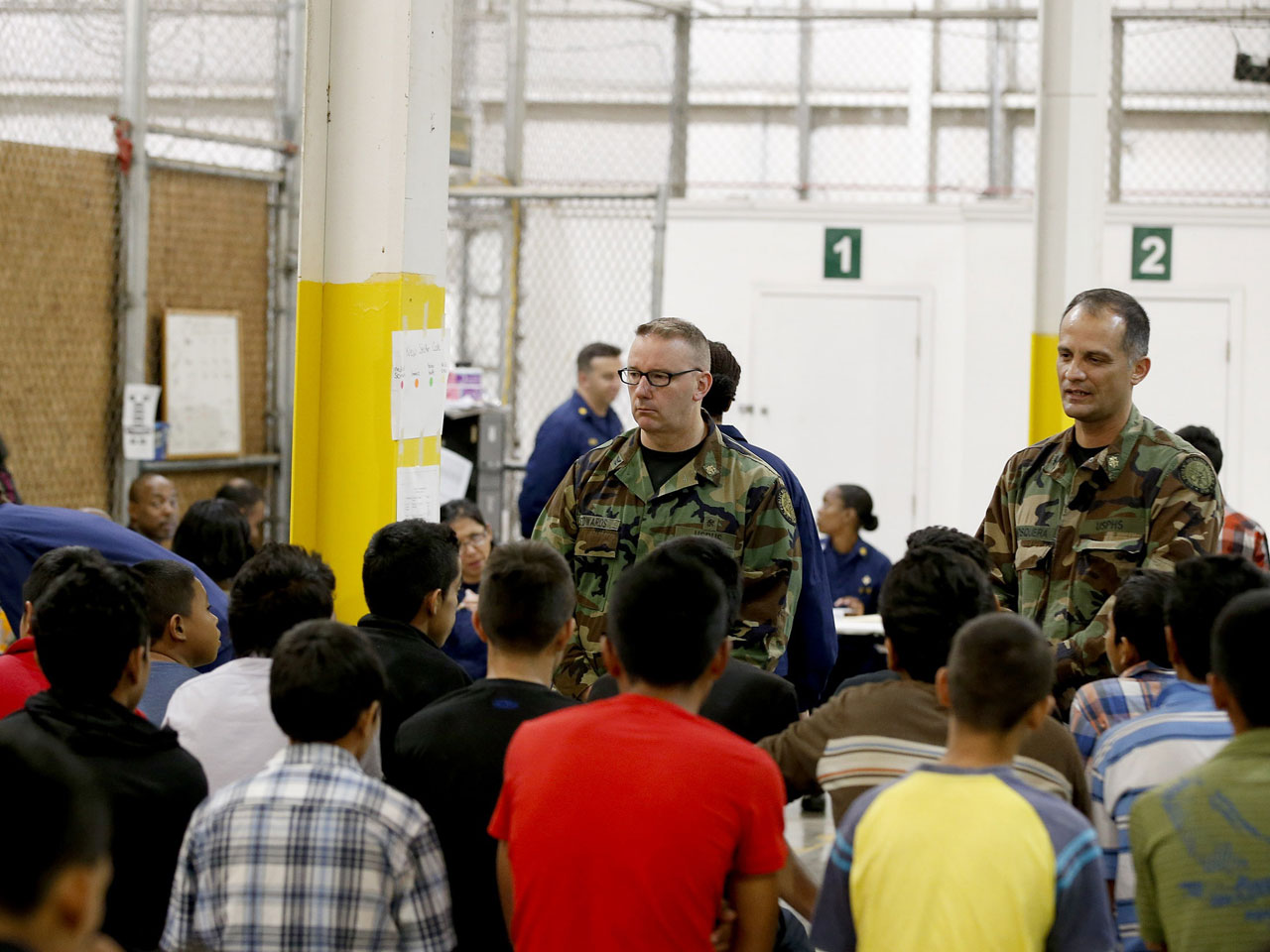 As unaccompanied child immigrants from Mexico and Central American continue streaming across the southern border, the U.S. faces a shortage of quick fixes to solve the crisis.

The roots of the problem - spurred by poor economic conditions and violence in Central America, weak enforcement of Mexico's borders, powerful smuggling networks and a campaign of misinformation about U.S. immigration policies - will likely demand years of American engagement in Central America. In the meantime, U.S. officials must follow laws that demand that the government consider the best interests of the children once they cross the border and get processed into an already overburdened system.

"It is almost an impossible mission" for the Department of Homeland Security (DHS) and Customs and Border Protection (CBP), W. Ralph Basham, who was the CBP commissioner from 2006 to 2009 is now a founding partner of the Command Consulting Group, told CBS News. "You have parents who are willing to allow their children to be turned over to, in many cases, total strangers, sometimes coyotes, transporting them through multiple countries in order to dump them on the doorstep of the United States. It's a very difficult thing for the United States to turn them away."

Legally, the United States cannot turn away many of the 52,000 children who have crossed the U.S.-Mexico border alone since the beginning of last October. Border patrol agents can turn back any Mexican children at the border but those from non-contiguous countries - mostly Honduras, El Salvador and Guatemala - are taken into custody and must be transferred into the care of the Office of Refugee Resettlement (an agency within the Health and Human Services (HHS) Department). They will care for the children while they seek to place them with relatives or guardians within the United States as they await deportation proceedings.

Some lawmakers, including House Speaker John Boehner, R-Ohio, and Gov. Rick Perry, R-Texas, have called for more agents at the border, or even the deployment of National Guard troops to help alleviate the situation. Basham and Jayson Ahern of the Chertoff Group, a former acting commissioner of CBP, said the National Guard could play a role in caring for the children, who are overwhelming border patrol agents and pulling them away from their primary responsibility of controlling the border.

But, Basham said, "that is not going to solve the fundamental problem that we have right now...as long as the countries of origin and the families are willing to turn these children over to these folks we're still going to have this problem. If we allow them in and continue to allow them in they're going to continue to come."

Furthermore, National Guard troops would have no more authority to turn away these children than border patrol agents do. As of last week, the White House said it had no plans to deploy troops to the border, believing that there have already been significant "surging" efforts to deal with the problem.

The administration is working to increase the capacity for housing families with children. Holding facilities for the children are in such short supply that three military facilities have been designated for emergency use.

Federal Emergency Management Agency (FEMA) Administrator Craig Fugate, who is heading up the federal government's coordinated response, said more capacity is still needed to process the children through CBP and transfer them to HHS within 72 hours, as is required by law. CBP is building out one processing center and another one is expected in mid-July, he said at a hearing before the House Homeland Security Committee Tuesday.

The administration has increased the number of immigration judges, asylum officers and attorneys being sent to the border to speed up the removal process, one of the few steps it can take to reduce the population of unaccompanied children within the U.S.

The U.S. is planning to give the governments of Honduras, El Salvador and Guatemala an additional $9.6 million to help them repatriate citizens who are sent home, the administration announced last week.

But many children may seek asylum, drawing out the legal process. Several House Democrats introduced legislation that would provide legal representation to the children so they are better equipped to make those claims. The lawmakers argue that would actually reduce the time they spend in custody and reduce some unnecessary court proceedings.

"The whole judicial system is being crushed by this so you need to provide resources to the Department of Justice and to the U.S. attorneys out there, and the immigration judges that have to hear these cases," Basham said. "They're overwhelmed, and sometimes it's years before someone gets in front of an immigration judge."

Ahern told CBS News that the administration should look at how quickly they can process the children through the detention process (or use alternatives) and "saturate" the region with more immigration judges.

"As far as from an immediate standpoint, it seems as though the appropriate steps being taken," he said. "Many of the other steps are going to take additional time...this may be with us for a while."

The steps the U.S. has taken to increase the capacity to care for the unaccompanied minors and speed up the removal process isn't likely to reduce the flow of those trying to enter the U.S. For that, Basham and Ahern both say the governments of Central American countries and Mexico need to step up their efforts to stop so many children from leaving.

"There's never a single issue that's there causing smuggling or criminal activity to occur. There's always many factors," Ahern said when asked why so many children are leaving. "What we can do is to actually make that region, those countries, more stable so that there is an opportunity for those children not to live in fear."

"I don't know how they're going to be able to solve this until they can get the cooperation of the Central American governments to stop this flow of these minors out of their countries," Basham said.

Many lawmakers have also said the U.S. will have to push Mexico to do more to seal its own borders, since Central American children must come up through the country's southern border with Guatemala. But Basham explained that even this is a difficult prospect because the border is dense and difficult to manage. It's hard for U.S. officials to assist because of sovereignty issues. Right now, there is a relatively free flow, he said.

Ahearn added, "it's not as easy as telling Mexico to do more to control their border."

All of these efforts, Ahern noted, will take years to change the situation on the ground.

Basham also called for a legislative solution. During the House Homeland Security Committee hearing Tuesday, Rep. Mike Rogers, R-Ala., called for the children to be debriefed, cleaned up, and put on buses back to Central America, which is currently not allowed by law. Still, that could be "its own logistical nightmare," Basham said, and the optics are terrible for the U.S. government.

Although Congress is beginning to look for solutions to the problem, so far lawmakers seem preoccupied with who is to blame for the crisis. While Democrats point to the poor economic conditions, violence and gang activity in the countries, Republicans say the children are lured to the U.S. by the Obama administration's Deferred Action for Childhood Arrivals (DACA), the 2012 policy that suspends deportation for many immigrants brought to the U.S. illegally as children before 2007. They also pointed to the current discussions of immigration reform, including the push by the administration for a solution that includes a pathway to citizenship for some illegal immigrants.

DHS Secretary Jeh Johnson penned an open letter that ran in Spanish-language media outlets over the weekend warning parents that the journey to the U.S. is dangerous and will not end in their children being allowed to stay.

"The criminal smuggling networks that you pay to deliver your child to the United States have no regard for his or her safety and well-being - to them, your child is a commodity to be exchanged for a payment. In the hands of smugglers, many children are traumatized and psychologically abused by their journey, or worse, beaten, starved, sexually assaulted or sold into the sex trade; they are exposed to psychological abuse at the hands of criminals," he wrote. The long journey is not only dangerous; there are no 'permisos,' 'permits,' or free passes at the end."

Members of Congress are beginning to get more involved, however, On Tuesday, Boehner named seven Republicans to a working group to address the crisis. The group is led by Texas Rep. Kay Granger, who earlier in the day proposed a $120 million boost in funds for Mexico and Central American countries to improve their border security, combat human trafficking and smuggling, repatriate and reintegrate immigrants deported from the U.S., and support a regional dialogue on issues related to the southern border crisis.

"This dire situation along the border requires that immediate solutions be developed and implemented," Granger said.

Members are expected to meet sometime Wednesday, with an eye toward making the group a resource for accurate information on the crisis and the place for Congress to make recommendations to the administration.

Three Democratic senators and two Democratic representatives also unveiled a plan to address the situation. They urged the administration to focus on anti-smuggling efforts and programs to combat criminal activity, in coordination with the Central American governments, and boost growth. They also recommended several steps to safely manage the flow of children already in U.S. custody.

But all of these efforts will take time, making it likely that unaccompanied children are unlikely to stop showing up at the border in the near future.

"It really is the perfect storm down there right now," Basham said. "It's very, very difficult to come up with a solution."