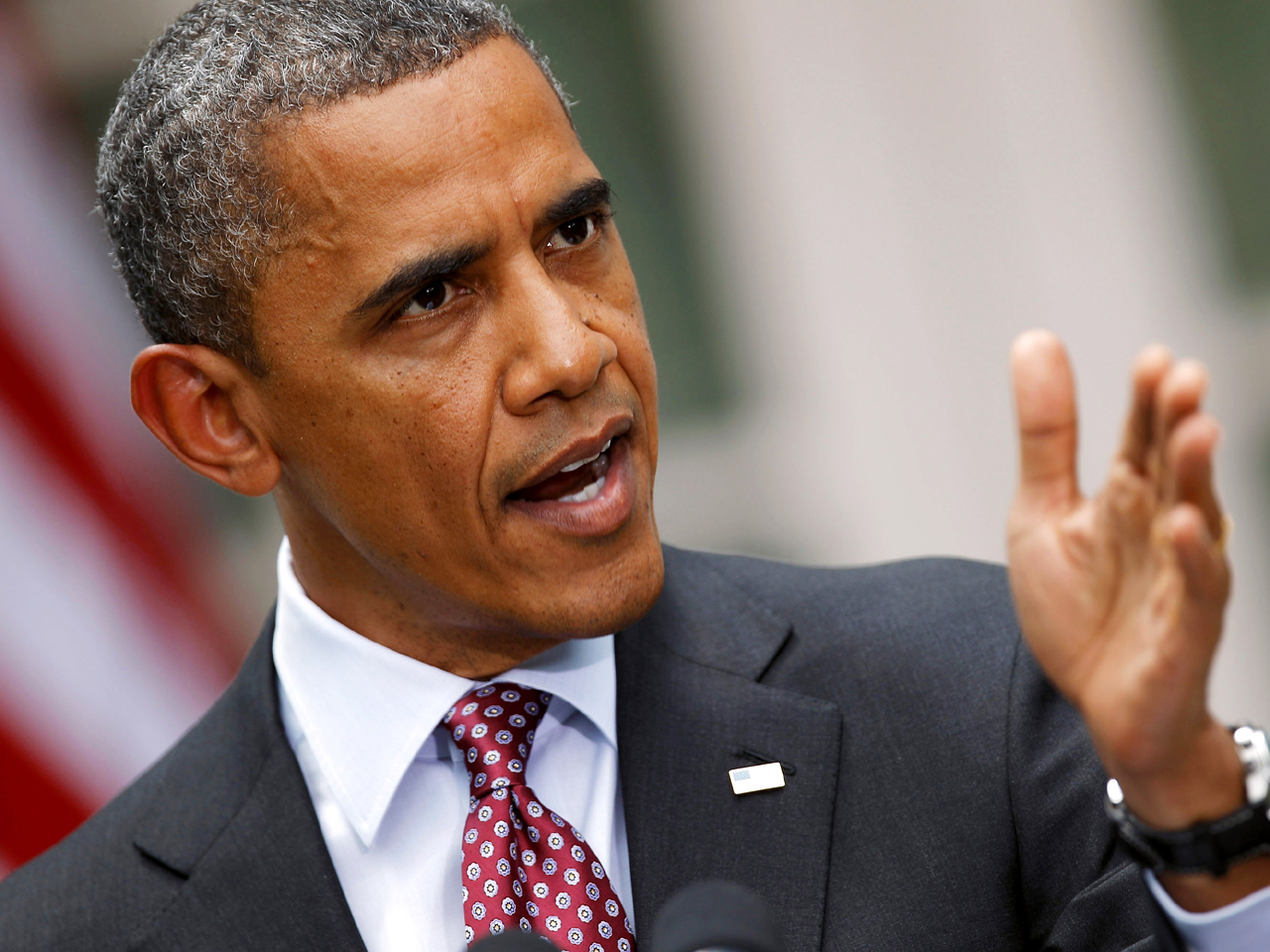 (CBS/AP) WASHINGTON - President Obama eased enforcement of immigration laws Friday, offering a chance for hundreds of thousands of illegal immigrants to stay in the country and work. Immediately embraced by Hispanics, the extraordinary step touched off an election-year confrontation with congressional Republicans.

"This is not amnesty; this is not immunity; this is not a path to citizenship; it's not a permanent fix," Mr. Obama said. "This is a temporary stopgap measure that lets us focus our resources wisely while giving a degree of relief and hope to talented, driven, patriotic young people. It is the right thing to do."

The policy change will affect as many as 800,000 immigrants who have lived in fear of deportation. It bypasses Congress and partially achieves the goals of the "DREAM Act," congressional legislation that would establish a path toward citizenship for young people who came to the United States illegally but who attend college or join the military.

Under the administration plan, illegal immigrants will be immune from deportation if they were brought to the United States before they turned 16 and are younger than 30, have been in the country for at least five continuous years, have no criminal history, graduated from a U.S. high school or earned a GED or served in the military. They also can apply for a work permit that will be good for two years with no limits on how many times it can be renewed.

Mr. Obama said the change would become effective immediately to "lift the shadow of deportation from these young people."

(At left, watch Mr. Obama respond to a reporter who interrupted him)

The move comes in an election year in which the Hispanic vote could be critical in swing states like Colorado, Nevada and Florida. While Mr. Obama enjoys support from a majority of Hispanic voters, Latino enthusiasm for the president has been tempered by the slow economic recovery, his inability to win congressional support for a broad overhaul of immigration laws and by his administration's aggressive deportation policy.

The step, to be carried out by the Department of Homeland Security, comes one week before Mr. Obama plans to address the National Association of Latino Elected and Appointed Officials' annual conference in Orlando, Fla. Republican presidential challenger Mitt Romney is to speak to the group on Thursday.

In New Hampshire, Romney said Mr. Obama's decision will make it harder to solve the country's larger immigration problems. He did not say he would reverse the decision if elected. The plight of illegal immigrants who were brought to the U.S. as children is "an important matter to be considered," Romney said. But he said Mr. Obama's decision will make finding a long-term solution more difficult.

During the Republican presidential primaries, Romney said he would veto the DREAM Act.

"Many of these young people have already contributed to our country in significant ways," Homeland Security Secretary Janet Napolitano wrote in a memorandum describing the administration's action. "Prosecutorial discretion, which is used in so many other areas, is especially justified here."

Conrado Santo, of the Boston-based Student Immigrant Movement, which works with young illegal immigrants, may be affected by the policy change. He told CBS Radio News he was 13 years old when his parents brought him to the United States. They came on a tourist visa and stayed. He's 24 now and has been living undocumented in the United States for more than 10 years.

"This is just a moment of just joy and excitement for me, for all of the people around me and my family and everyone," Santo said.

"People who work in this country, especially those producing our food, should have the opportunity to be immigrants and not just be guest workers," Goldstein told CBSNews.com. "We are a nation of immigrants, not a nation of guest workers."

The policy closely tracks a proposal being drafted by Republican Sen. Marco Rubio of Florida, a potential vice presidential running mate for Romney, as an alternative to the DREAM Act, formally the Development, Relief and Education of Alien Minors Act.

"Today's announcement will be welcome news for many of these kids desperate for an answer, but it is a short-term answer to a long-term problem," Rubio said in a statement. "And by once again ignoring the Constitution and going around Congress, this short-term policy will make it harder to find a balanced and responsible long-term one."

In Arizona, Maricopa County Sheriff Joe Arpaio - who, more than any other police boss, has pushed the bounds of local immigration enforcement - told CBS Radio News the policy change "looks like it's the beginning of amnesty."

"This seems to be politically motivated," said Arpaio. "Why now, just during the election year, and why not let Congress look at this next year?"

"They get to stay here on a renewable two-year permit, and they get allowed to work," Krikorian told CBSNews.com. "The president has committed what is clearly an unconstitutional act, and Congress has a responsibility -- even those who oppose the DREAM Act have a responsibility -- to withhold funds to DHS (Department of Homeland Security)."The change drew a swift repudiation from Republican lawmakers, who accused Mr. Obama of circumventing Congress in an effort to boost his political standing and of favoring illegal immigrants over unemployed U.S. citizens.

"President Obama and his administration once again have put partisan politics and illegal immigrants ahead of the rule of law and the American people," Rep. Lamar Smith of Texas, GOP chairman of the House Judiciary Committee, said in a statement.

Republicans including Romney say they want tighter border security measures before they will consider changes in immigration law. Romney opposes offering legal status to illegal immigrants who attend college but has said he would do so for those who serve in the armed forces.

Praise for the new policy was also swift. Sen. Dick Durbin of Illinois, the No. 2 Senate Democrat, called the decision "an historic humanitarian moment" and compared it to the decision two decades ago to give political asylum to Cuban refugees fleeing the communist island. "This is at least a reflection of that moment in history."

In New York, Mayor Michael Bloomberg said, "Ending deportations of innocent young people who have the potential to drive tomorrow's economy is long overdue, as are many commonsense reforms needed to center our immigration policy around our economic needs."

Midway through his remarks, Mr. Obama was interrupted by a reporter from a conservative online publication, Neil Munro of the Daily Caller, who shouted, "Why do you favor foreigners over American workers?" Clearly irritated, Mr. Obama said that he was explaining the policy, not looking for an argument, and that the change was the "right thing to do for the American people."

Napolitano said Friday the decision "is well within the framework of our existing laws."

"We should not forget that we are a nation of laws and a nation of immigrants," she said. "With respect to these young people, deferred action, the decision I announced today, is simply the right thing to do."

The Obama administration's deportation policies have come under fire, and Latino leaders have raised the subject in private meetings with the president. In 2011, Immigration and Customs Enforcement deported a record 396,906 people and is expected to deport about 400,000 this year.

A December poll by the Pew Hispanic Center showed that 59 percent of Latinos disapproved of the president's handling of deportations.

The administration announcement comes ahead of an expected Supreme Court decision on Arizona's tough 2010 immigration law that, among other things, requires police to ask for immigration papers from anyone they stop or arrest and suspect is in the country illegally. The Obama administration has challenged the law.

The exact details of how the program will work, including how much immigrants will have to pay to apply and what proof they will need, still are being worked out.

Administration officials stopped short of calling the change an administrative DREAM Act, but the qualifications track with those laid out in a 2010 version that failed in the Senate after passing in the House. They said comprehensive overhaul of the immigration system remained an administration priority.