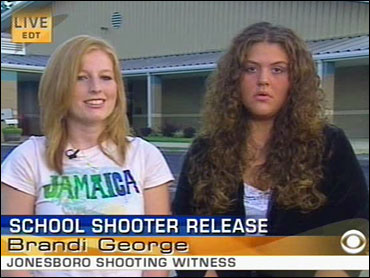 Seven years after a massacre at a Jonesboro, Ark., middle school, one of the convicted killers is scheduled to go free Thursday. And that's prompting anger from the relatives of Mitchell Johnson's victims, who say it's not fair he'll be able to resume his life, while they'll never see their loved ones again.

Four students and a teacher were killed when two boys lured them outside the Westside Middle School, then started shooting.

Johnson was convicted of murder as a juvenile. But because Thursday is his 21st birthday, he cannot legally be held in prison any longer.

Mitchell Wright was married to Shannon Wright, the teacher who was killed.

told
The Early Show co-anchor Harry Smith Thursday that, at first, "You're absolutely just devastated. Then you try to start piecing your life back together. You know, you have a hearing, and you get some closure. And now, seven years later, it's like the closure that you had is totally wiped away, because there's no justice in this whatsoever."

Wright expressed skepticism about claims by Johnson's mother that Johnson intends to enter a seminary, adding, "God knows his heart. I don't. But it's a really scary situation."

Wright still lives in Jonesboro. His son Zane, 10, told Smith, "I don't want him to get out of prison, but I realize that he's going to have to get out of prison. And it's just not fair, because he gets to go home and see his mom, start a new life. And my mom, she doesn't.

Whitney Irving was shot in the back by Johnson, and Brandi George witnessed the carnage. Both spoke to Smith from the middle school's parking lot Thursday.

Irving says the fact that Johnson will walk free is just hitting home: "Right now, I'm mad. There's really no other word that can express it. You know, also, having a child, it worries me that I'll have to send my child to school one day and he's out, he's free.

"Not one day has gone by in seven years that I have not had a thought about what happened."

George says she doesn't "think it's fair that he gets to come back and live in society, but the other five have to stay gone forever. And he gets to start over his life with a clean slate."

Added Irving: "It's like, we had seven years. We knew this was going to happen. But it's still a big shock to a lot of people, I guess, because you just hope that something would change. Everyone is very aggravated. It's not justice, you know."