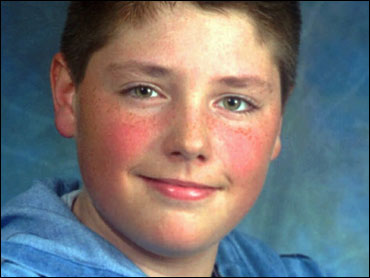 Mitchell Johnson, one of the two boys convicted of what was at the time the worst school shooting on record, gets to walk away Thursday scot-free, reports

It was just seven years ago, when Johnson, then 13, and his companion, 11-year-old Andrew Golden, stole an arsenal of weapons and then opened fire on a courtyard full of students and teachers at an Arkansas middle school.

Their ambush-style assault killed four young girls and an English teacher, who tried to shield her students from the barrage of bullets.

Under a now-changed Arkansas law, the boys were charged as delinquents, which meant they could only be held until they were 18. Federal prosecutors then stepped in with firearms violations which kept them in prison for three more years. But Johnson turns 21 on Thursday and cannot legally be held any longer.

Many Jonesboro residents question whether justice has been served.

"They barely served a year and a half for each life they took, whereas some people kill one person and serve the rest of their lives. It's really unfair," said Brandi Varner, who lost her younger sister Brittheny in the attack.

Student Whitney Irving was shot in the back, but survived. Although she has since graduated from high school, married and had a child, the attack remains a part of her everyday life.

"Not one day has gone by in seven years that I have not had a thought about what happened," she told

Mitchell Wright, whose wife, Shannon, was the teacher killed in the attack, told CBS that "seven years later, it's like the closure that you had is totally wiped away because there's no justice in this whatsoever."

Wright's son Zane was two at the time of the attack. He's now 10 and says, "I don't want him to get out of prison, but I realize that he's going to have to get out of prison. And it's just not fair, because he gets to go home and see his mom, start a new life. And my mom, she doesn't. ... He's gonna get to see his mom again. I don't get to see mine until I go to heaven."

On March 24, 1998, Johnson and Golden stole high-powered rifles from Golden's grandfather. Dressed in camouflage, they waited in the woods behind the school until the lunch hour, when Golden ran into a hallway to trigger a fire alarm.

As classmates and teachers filed out of the buildings, Johnson and Golden opened fire. Children ducked or scrambled while teachers tried to herd pupils back into the building. Four students and a teacher were killed; 10 others were injured.

The Jonesboro shootings came amid a number of schoolyard assaults in which teenagers attacked their classmates. Thirteen died, along with two shooters, at Columbine, Colorado, a year after Jonesboro. Luke Woodham killed two students in Pearl, Mississippi, in October 1997 after killing his mother, and Kip Kinkel killed two teenagers and wounded more than 20 at Springfield, Oregon, after killing his parents in May 1998.

Woodham is in prison for life; Kinkel is serving nearly 112 years.

Because of a since-closed loophole in Arkansas' juvenile justice system, the state had no way to hold Johnson and Golden beyond their 18th birthdays. Federal prosecutors used weapons laws to keep the boys locked up until age 21. Golden is scheduled to be freed in 2007.

Dale Haas, the sheriff at the time of the shootings, believes Johnson and his accomplice are getting off too lightly.

"How could anyone think they would be rehabilitated?" Haas asked.

With some residents in this town of 58,800 people angry over the sentences, Craighead County Sheriff Jack McCann wants to offer protection to Johnson's mother, Gretchen Woodard, who still lives near the school where the shootings took place.

"I want to prepare her that, if he's coming back here, there are going to be some problems — to what extent I don't know," McCann said. "We are going to be very open with her about what could happen and do whatever we can to help them.

"Whether anybody agrees with it or not, he has served his sentence," McCann said.

But Woodard said her son won't return to Arkansas.

"I can promise ... guarantee ... that he's not moving back to Arkansas," Woodard told the Arkansas Democrat-Gazette newspaper. "That's not wise. That's not going to happen."

Woodard said her son wants to enroll in college and become a minister. She said her son dwells on what happened.

"He'd give anything. He'd give his life 100 times over to turn this thing back. The best thing, I really believe, the best thing to do is give him a chance," she told the newspaper. "Let him get out there and spread his wings and help other people."