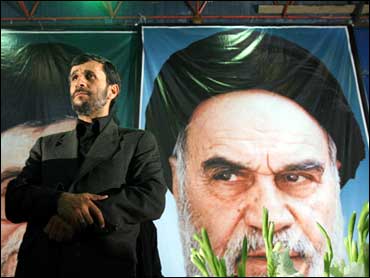 "We won't make any pre-judgment about the proposal to be presented to us... we won't be in a hurry to judge it," Ahmadinejad told thousands of people in the capital Tehran.

"We are after negotiations but fair and just negotiations. They must be without any conditions," he said in a speech to mark the anniversary of the death of Ayatollah Ruhollah Khomeini, the founder of Iran's 1979 Islamic revolution.

Underlining his point, the president said "the Iranian nation won't give in to talks that contain threats or conditions that seek to deprive our definite right."

In a rare show of optimism, the Iranian Foreign Minister said earlier on Saturday that a breakthrough was possible. Tehran, he said, would welcome unconditional talks with all parties, including the United States.

"We think that if there is good will, a breakthrough to get out of a situation they have created for themselves... is possible," Manouchehr Mottaki told a news conference.

Mottaki said European Union foreign policy chief Javier Solana would hand deliver the package to Iranian officials in the next few days. No specific date has yet been set for the trip, he said.

In Belgium, Solana's spokeswoman Cristina Gallach confirmed he was ready to travel to Iran very soon. "The trip is not going to be a negotiating trip, the objective is to present the proposals of the international community," she said.

Iran would study the package "within the necessary timeframe," Mottaki said.

The package, agreed upon Thursday by the five permanent members of the U.N. Security Council and Germany, carries the threat of U.N. sanctions if Tehran remains defiant over its nuclear program which the West fears is a cover for producing nuclear weapons. Iran says it is only striving to use nuclear reactors for generating electricity.