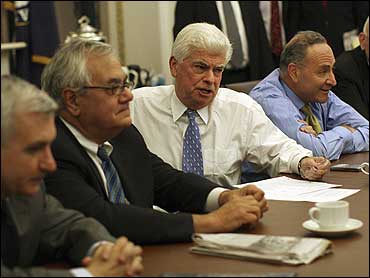 A Republican revolt stalled urgent efforts to lash together a national economic rescue plan Thursday, a chaotic turnaround on a day that had seemed headed for a success that President Bush, both political parties and their presidential candidates could celebrate at an extraordinary White House meeting.

Weary congressional negotiators worked into the night, joined by Treasury Secretary Henry Paulson in an effort to revive or rework the $700 billion proposal that President Bush said must be quickly approved by Congress to stave off potentially "a long and deep recession."

They gave up after 10 p.m. EDT, more than an hour after the lone House Republican involved, Rep. Spencer Bachus of Alabama, left the room. Democrats blamed the House Republicans for the apparent stalemate. Those conservatives have complained that the plan would be too costly for taxpayers and would be an unacceptable federal intrusion into private business.

Talks were to resume Friday morning on the effort to bail out failing financial institutions and restart the flow of credit that has begun to starve the national economy.

After six days of intensive talks on the unprecedented package proposed by the Bush administration, with Wall Street tottering and presidential politics intruding six weeks before the election, there was more confusion than clarity.

The day's earlier apparent breakthrough, announced with fanfare at midday, was followed by a White House summit bringing together President Bush, presidential contenders John McCain and Barack Obama, and top congressional leaders. But that meeting, aimed at showing unity in resolving a national financial crisis, broke up with conflicts in plain view.

Inside the session, House Republican leader John Boehner expressed misgivings about the emerging plan and McCain would not commit to supporting it, said people from both parties who were briefed on the exchange. They spoke on condition of anonymity because the session was private.

The earlier agreement by key members of Congress from both parties - but not top leaders - would have given the Bush administration just a fraction of the money it wanted up front, subjecting half the $700 billion total to a congressional veto.

The proposed bill, largely crafted by Democrats with only modest Republican input, would also likely have included caps on the pay of executives of firms that take federal assistance, mortgage relief for families facing foreclosure, equity stakes for taxpayers and an oversight board to hold the Treasury secretary accountable, reports CBS News correspondent Bob Orr.

But conservatives were still in revolt, balking at the astonishing price tag of the proposal and the hand of government that it would place on private markets.

Sen. Richard Shelby of Alabama, the top Republican on the Senate Banking Committee, emerged from the White House meeting to say the announced agreement "is obviously no agreement."

One group of House GOP lawmakers circulated an alternative that would put much less focus on a government takeover of failing institutions' sour assets. This proposal would have the government provide insurance to companies that agree to hold frozen assets, rather than have the U.S. purchase the assets.

Rep Eric Cantor, R-Va., said the idea would be to remove the burden of the bailout from taxpayers and place it, over time, on Wall Street instead. The price tag of the administration's plan to bail out tottering financial institutions - and the federal intrusion into private business matters - have been major sticking points for many Republican lawmakers.

There is wide agreement the U.S. economy is in peril, with financial institutions going under or near the edge and recession looming along with the resulting layoffs and increased home foreclosures.

There had been hopes for broad agreement, too, on a prescription by now, with a confident White House announcement by the president, McCain, Obama and congressional leaders.

But the best Senate Republican leader Mitch McConnell would say afterward was, "It's clear that more progress is needed and we must continue to work together quickly to protect our economy."

Democrat Obama and Republican McCain, who have both sought to distance themselves from the unpopular Bush, sat down with the president at the White House for an hourlong afternoon session that was striking in this brutally partisan season - but also, according to one participant, "a full-throated discussion." By also including Congress' Democratic and Republican leaders, the meeting gathered nearly all Washington's political power structure at one long table in a small West Wing room.

"All of us around the table ... know we've got to get something done as quickly as possible," Bush told reporters, brought in for only the start of the meeting. Obama and McCain were at distant ends of the oval table, not even in each other's sight lines. Bush, playing host in the middle, was flanked by Congress' two Democratic leaders, House Speaker Nancy Pelosi and Senate Majority Leader Harry Reid.

McCain and Obama later said they both still expected an agreement could be reached.

Under the accord announced hours earlier among key lawmakers, the Treasury secretary would get $250 billion immediately and could have an additional $100 billion if he certified it was needed, an approach designed to give lawmakers a stronger hand in controlling the unprecedented rescue. The government would take equity in companies helped by the bailout and put rules in place to limit excessive compensation of their executives, according to a draft of the outline. .

As negotiations continued Thursday night, Michele Davis, the chief Treasury spokeswoman said, "There are still open issues to be resolved, and we are committed to resolving them."

The plan's centerpiece still is for the government to buy the toxic, mortgage-based assets of shaky financial institutions in a bid to keep them from going under and setting off a cascade of ruinous events, including wiped-out retirement savings, rising home foreclosures, closed businesses, and lost jobs.

Layered over the White House meeting was a complicated web of potential political benefits and consequences for both Obama and McCain.

Former President Bill Clinton told CBS' Early Show that he'd bank on Obama over McCain to lead the country back to economic prosperity.

"I think that he (Obama) personally, and our party generally, tend to produce better economic results for ordinary people. And I think that, while Sen. McCain - I like him and he's a friend of mine, and I trust him in many ways - but the Democratic economic philosophy and Obama's specific proposals, I think, will produce better results for ordinary Americans," he said.

McCain hoped voters would believe that he rose above politics to wade into successful, nitty-gritty dealmaking at a time of urgent crisis, but he risked being seen instead as either overly impulsive or politically craven, or both. Obama saw a chance to appear presidential and fit for duty, but was also caught off guard strategically by McCain's surprising gamble in saying he was suspending his campaigning and asking to delay Friday night's debate to focus on the crisis.