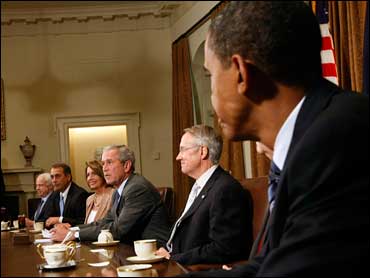 As turmoil on the U.S. financial markets threatened Thursday to upend the presidential campaign and scratch the first debate between Barack Obama and John McCain, it appeared hard bargaining on the Bush administration's $700 billion bailout had failed to seal a deal.

"I don't believe we have an agreement," said the ranking minority member of the Senate Banking Committee. "There's still a lot of different opinions."

By late Thursday, a deal that had been tentatively agreed to by key party leaders earlier in the day broke apart after evening meetings among lawmakers, including Treasury Secretary Henry Paulson produced no resolution. More meetings are expected Friday.

Neither McCain, a Republican, nor Obama, a Democrat, spoke to reporters as they left through a White House exit closed to journalists. Two aides appeared, however, and said Obama would be making a statement at a Washington hotel within minutes and that McCain had gone back to the Capital building.

Earlier, after a two-hour negotiating session in Congress, Sen. Chris Dodd had said, "We are very confident that we can act expeditiously." Dodd, a Democrat, heads the Senate Banking Committee. Rep. Barney Frank, a Democrat who is chairman of the committee handling the measure in the House of Representatives had a similar assessment.

In an extraordinary display of political maneuvering, McCain announced on Wednesday he was suspending his campaign to return to Washington to help with the negotiations. Lawmakers already were well on their way to agreement before the four-term Arizona senator was able to reach the capital from New York.

McCain had also said he wanted to delay Friday's first presidential debate. While welcoming news of a breakthrough, McCain's campaign still was not prepared to commit to the Friday forum.

He said McCain was optimistic about the agreement but developments so far had not changed the candidate's plans not to debate.

As the financial chaos threatened to consume the presidential campaign, Bush on Wednesday made his first address to the nation in a prime-time television slot this year.

He declared "our entire economy is in danger" and predicted "a long and painful recession" unless Congress took quick action. But his prodding of lawmakers was already appearing incongruous because congressional leaders were saying a deal was close.

Obama had rejected McCain's call for delaying the debate, but joined his opponent in issuing a statement declaring that American politicians must overcome partisanship or "risk an economic catastrophe."

Both Mississippi Gov. Haley Barbour and University of Mississippi Chancellor Robert Khayat spoke to reporters Thursday, saying they believed the debate would be held as scheduled.

"I expect there to be a debate tomorrow night, and I'm looking forward to it," Barbour said at a brief news conference in Oxford. "I don't have any inside information but that's my expectation."

Khayat said his staff had been in contact with both campaigns and had heard nothing to suggest the forum would be delayed.

Earlier Thursday, Obama spoke by satellite to the Clinton Global Initiative in New York and renewed his refusal to put off the debate.

"The American people deserve to hear directly from myself and Sen. McCain about how we intend to lead our country," he said in an address from Florida. "The times are too serious to put our campaign on hold, or to ignore the full range of issues that the next president will face."

The heart of the enormous bailout plan involves the government buying up sour assets of shaky financial firms, action designed to keep essential credit markets open and preventing what some fear would be an economic calamity not seen since the Great Depression of the 1930s.

In their joint statement, McCain and Obama said now is the time to "rise above politics for the good of the country. We cannot risk an economic catastrophe." But politics remained front and center.

The candidates spoke privately Wednesday in drawing up the document, but McCain beat Obama to the punch with the first public statement, saying the Bush plan to prop up the financial community seemed headed for defeat and a bipartisan solution was needed urgently.

"It has become clear that no consensus has developed to support the administration's proposal," McCain said. "I do not believe that the plan on the table will pass as it currently stands, and we are running out of time."

Frank had said he was not even sure the crisis session with Bush, Obama and McCain still was necessary, but added "it's always fun to go to the White House." On Wednesday he accused McCain of "trying to take credit for something that's already happening without him."