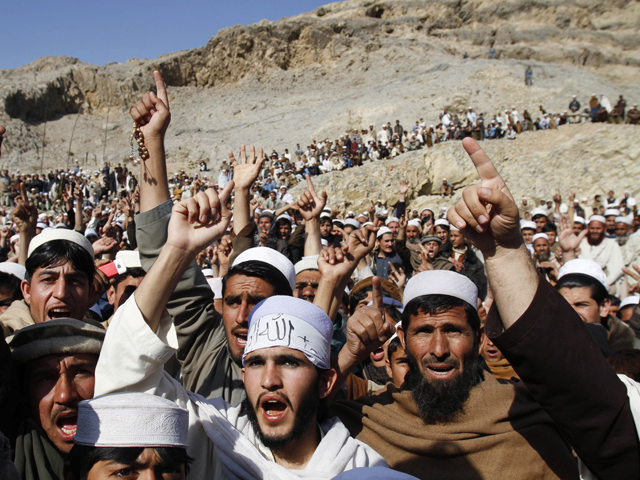 The soldiers were disciplined for the mistaken burning of Korans earlier this year at a U.S. base in Afghanistan, and the Marines were punished for their participation in a video that showed them urinating on the corpses of Taliban insurgents.

U.S. military leaders widely condemned the incidents, which were both revealed earlier this year. The Koran-burning triggered riots in the street and retribution killings, including two U.S. troops who were shot by an Afghan soldier and two U.S. military advisers who were gunned down at their desks at the Interior Ministry.

The exact punishments were not disclosed Monday, and it was not clear whether the lack of criminal charges would trigger any protests in Afghanistan. Administrative punishments could include demotions, extra duty, forfeiture of pay, or a letter in their file. They could also stall any future advancement and end their military careers.

Aimal Faizi, a spokesman for Afghan President Hamid Karzai, said Karzai's office would review the decisions and wait until Tuesday to respond. The news on the punishments came late at night in Afghanistan.

The Navy said the sailor was found not guilty of any alleged misconduct and that no further disciplinary or administrative action was warranted.

The Korans and other Islamic books were taken from the Parwan Detention Facility, and officials believed that extremists being detained there were using the texts to exchange messages. The religious books and other materials were put in burn bags and then later thrown into a fire pit used to burn garbage at Bagram Air Field, a major U.S. base north of Kabul.

A report on the investigation into the February Koran burning is expected to be released Monday. But officials have previously detailed the incident, describing it as not intentional, but as a mistake compounded by some bad decisions.

U.S. officials have said that the holy books were pulled out by Afghan workers before they were destroyed. President Obama apologized to Karzai for the incident.

Afghan officials, however, have claimed the burning was intentional, and it reinforced perceptions in the country that Americans are insensitive to the Afghans' religion and culture.

The urination video, which came to light in January and appeared on YouTube, showed four Marines in full combat gear urinating on the bodies of three dead men. On Monday, the Marine Corps revealed that there were also photographs taken at the time.

Discovery of the video led to a criminal investigation by the Naval Criminal Investigative Service as well as a Marine investigation of the unit involved — the 3rd Battalion, 2nd Marines — which fought in the southern Afghan province of Helmand for seven months before returning to its home base at Camp Lejeune, N.C., last September.

In the video, one of the Marines looked down at the bodies and quipped, "Have a good day, buddy."

The incidents were the first in a yearlong series of disconcerting events straining the relationship between the U.S. military and its Afghan hosts.

As of Monday, 12 American soldiers had died in August from so-called "insider attacks," killings carried out at the hands of people dressed in Afghan military uniforms. Local sources told CBS News that two U.S. troops died Monday on a joint patrol in a fairly remote area when some kind of dispute broke out after they set up a checkpoint.

It's been a problem for the U.S.-led military coalition for years, but it has exploded recently into a crisis. There have been at least 32 attacks so far this year, killing 42 coalition members, mostly Americans. Last year, there were 21 attacks, killing 35; and in 2010 there were 11 attacks with 20 deaths.

In March, 16 Afghans from villages surrounding a U.S. base were killed during a middle-of-the-night shooting massacre in southern Afghanistan. Staff Sgt. Robert Bales has been accused of carrying out the killings and is awaiting trial. Military officials have said that Bales walked to two local villages, where he allegedly killed the villagers and then burned some of their bodies.

U.S. and Afghan officials were able to put one area of deep contention behind them. In April, the two nations signed an agreement putting Afghan forces in charge of night raids that Karzai repeatedly called to be stopped because he said civilians were killed or injured in the crossfire. The deal kept the raids going, which the U.S. counted among the U.S. military's most powerful weapons in hunting down Taliban fighters.