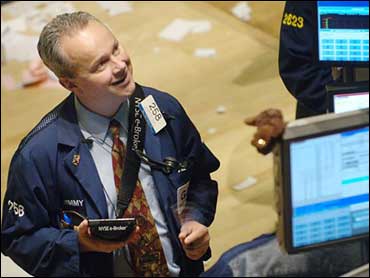 Basketball's a breeze when a guy knows his mother is safe.

A worried Paul Pierce struggled in the first half of No. 4 Kansas' game against Iowa State on Saturday because his mother, flying in from California, was not there at game time like she promised she would be.

Then he spotted her at halftime and heard her yell, "It's OK. I'm here now," and the Jayhawks rolled to a 71-54 victory, clinching their second straight Big 12 championship.

In the first half, as Kansas fought Iowa State's slow-down tactics, the worried son had two points.

In the second half, the relieved son scored 17.

"When we came out at halftime, I saw my mom in the crowd and she kind of inspired me," Pierce said. "I was worried that she had gotten lost."

"I think I was in Topeka, Kansas," said Mrs. Hosey, who had been to Lawrence only once before.

"I knew he would be worried about me. I had to let him see me and know I was at the game and I was OK. I told him, `Now you go play some ball."

Pierce scored six of Kansas' first eight points in a 17-4 second-half run as the Jayhawks (29-3, 13-1) pulled away from a shaky 1-point halftime lead and won their seventh conference title in eight years.

"This is what we work for all year," said Kansas coach Roy Williams, who sought out Pierce before the second half began and pointed out his mom. "It's a great accomplishment. The seniors have four of four (titles). It's really been a great run."

"We were down by one at the half, and that really built our confidence," Fizer said. "When we got back out there we just didn't take our time as well as we did in the first half."

Williams said there was no trick to stopping Fizer in the second half.

"We were just much more aware of where he was, more alert to what he was trying to do," Williams said. "But some of his shots just didn't go in."

Kansas is 28-2 in conference games since the Big 12 was formed. Since 1991, the Jayhawks have won seven of eight league titles, a string interrupted only by Missouri's 14-0 run through the Big Eight in 1993-94.

The Jayhawks went ice cold over the final 12 minutes of the first half, going 1-for-10 with eight turnovers, but still led 26-25 when Billy Thomas made two free throws with 18 seconds remaining.

After Stevie Johnson's steal and driving layup sliced Kansas' lead to 34-33 with 15:42 left in the second half, Pierce led the Jayhawks on a take-charge run. Iowa State, losing in Allen Fieldhouse for the 16th straight year, turned the ball over on five straight possessions during the spurt which T.J. Pugh capped with two free throws for a 51-37 lead.

"Kansas is an impressive basketball team," Iowa State coach Tim Floyd said. "Roy really gets those guys competing at every step. I was really impressed with the intensity they played with."

Raef LaFrentz had 18 rebounds to go with his 12 points and became Kansas' No. 2 career rebounder. Pugh tied his career high with 13 points, while Thomas had 12.

Johnson had 10 points for the Cyclones.