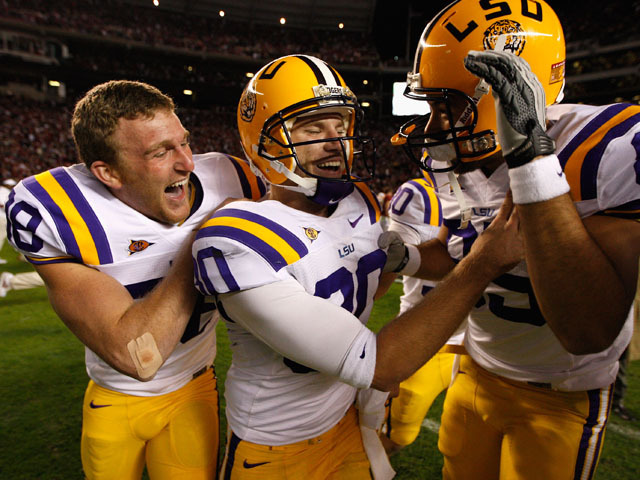 TUSCALOOSA, Ala. - No. 1 LSU gained the inside track to the BCS title game, beating No. 2 Alabama 9-6 on Drew Alleman's 25-yard field goal in overtime after a fierce defensive struggle in which neither team reached the end zone Saturday night.

The Crimson Tide missed four field goals, including Cade Foster's 52-yard attempt after Alabama got the ball first in the extra period. LSU appeared to win the game on Michael Ford's run around left end after taking a pitch, but he stepped out of bounds at the 7.

Full coverage of LSU vs. Alabama at CBSSports.com

After two plays gained nothing, LSU (9-0, 6-0 Southeastern Conference) sent on Alleman to attempt his third field goal of the game on third down. Alabama (8-1, 5-1) tried to freeze him by calling timeout, but he calmly knocked it through to set off a wild celebration by the visiting team.

The crowd of more than 100,000 at Bryant-Denny Stadium — most of them dressed in crimson — sat in stunned silence as LSU celebrated its victory in only the 23rd regular-season matchup between the top two teams in The Associated Press rankings.

LSU still must win its last three regular-season games — No. 8 Arkansas is the toughest test — and then would have to get through the SEC championship game. But the Tigers are the clear favorite after winning another huge game away from home, emerging with the victory in a matchup between the two teams generally considered the best in the land.

Alabama will long be moaning about how this one got away. Foster missed two first-quarter field goals, and Jeremy Shelley had one blocked before Shelley finally made one from 34 yards. Alleman kicked a 19-yarder on the final play of the first half, leaving the teams tied at 3 even though the Crimson Tide clearly had the upper hand.

Interceptions set up both field goals in the second half. Foster made one from 46 yards after Jarrett Lee threw his second pick of the game, then Alleman connected from 30 yards after Alabama's AJ McCarron made an ill-timed throw.