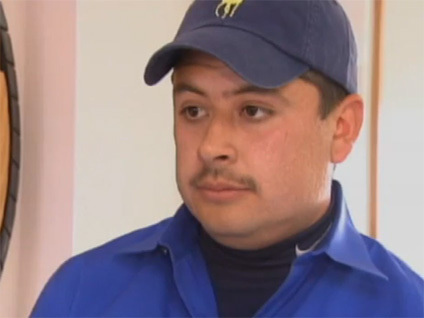 (CBS/AP) SUNLAND PARK, N.M. - Election officials on Friday certified results from this week's voting in this border town, but the newly-elected mayor may not be able to take office, having recently been indicted on extortion charges involving a sex tape.

Secretary of State Dianna Duran said the law requires all elected city officials be sworn in by the city council, and mayor-elect Daniel Salinas is barred from going to city hall, or having any contact with city officials, since he was arrested.

Salinas was barred after being accused of trying to force an opponent from the mayor's race with a secretly-recorded video of the candidate getting a topless lap dance.

Salinas, who is the current interim mayor, and city manager Jaime Aguilera were arrested on Feb. 25. CBS Affiliate KRQE reports Salinas is accused of arranging for a woman to give one of Salinas' opponents, Gerardo Hernandez, a topless lap dance that was secretly recorded.

Salinas denied any involvement in what Hernandez called a "set-up," but he did admit to releasing the recording after he said someone else gave it to him.

Salinas, who is the current interim mayor, and Aguilera both face extortion charges.