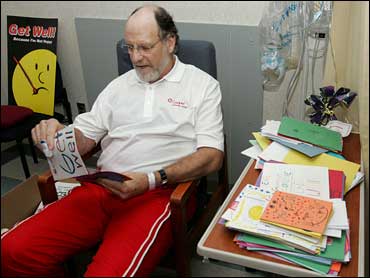 Gov. Jon S. Corzine was discharged from Cooper University Hospital on Monday, 18 days after he was admitted with critical injuries sustained in an automobile crash.

"I understand I set a very poor example for a lot of people," said a teary-eyed Corzine, who was not wearing a seat belt when he was critically injured in an April 12 automobile crash on the Garden State Parkway.

"I certainly hope the state will forgive me. And I'll work very hard to set the right kind of example," Corzine said from his wheelchair outside the hospital.

It was uncertain when he would be able to return to work. State Senate President Richard J. Codey is the acting governor.

Corzine fractured his left thigh and broke 11 ribs, his breastbone and other bones in a crash on April 12. He was operated on three times and a metal rod was inserted to stabilize his leg.

Doctors said Corzine will likely not be able to walk without crutches or a cane for at least six months.

The 60-year-old governor's SUV was being driven by a state trooper at 91 mph when it was clipped by a truck and lost control on the Garden State Parkway, slamming into a guard rail. Corzine wasn't wearing his seat belt, though doing so was required by state law.

A New Jersey resident has filed a civil complaint against Corzine for breaking the law. It carries a $46 fine. Corzine, a former investment banker who headed Goldman Sachs, has a net worth of millions of dollars.

Corzine will use his own money to pay for his medical treatment and will do his rehabilitation from the governor's mansion in Princeton, a spokesman said Friday.

Corzine has a luxury condo on the Hudson River in Hoboken, N.J., across from midtown Manhattan, reports WCBS' Sean Adams. The governor's mansion, Drumthwacket, will be equipped with a chair lift on the formal central staircase, and Corzine himself is paying for a heater for the outdoor pool

Most New Jersey governors do not actually reside in the mansion.

Statehouse workers have been installing fiber-optic cable into the governor's office to allow Corzine to do videoconferencing, spokesman Anthony Coley said.

The governor broke his left thigh in two places, broke 11 ribs, his breastbone, collarbone, and a vertebra in his lower back. He was operated on three times. For more than a week, he breathed with the help of a ventilator and got nutrition through a feeding tube.

The accident prompted State Attorney General Stuart Rabner on Thursday to commission an independent panel of experts to review the state police unit that drives and protects the governor.

This is Codey's fourth announced stint as acting governor. He replaced Jim McGreevey after his resignation in November 2004 and served until Corzine's term began the following January. However, The New York Times reports that Codey or another official has been acting governor many times during Corzine's administration. Corzine has spent one-fourth of his term outside the state.

The governor is the only statewide-elected official in New Jersey. He or she appoints all other executive branch officials, including the attorney general.