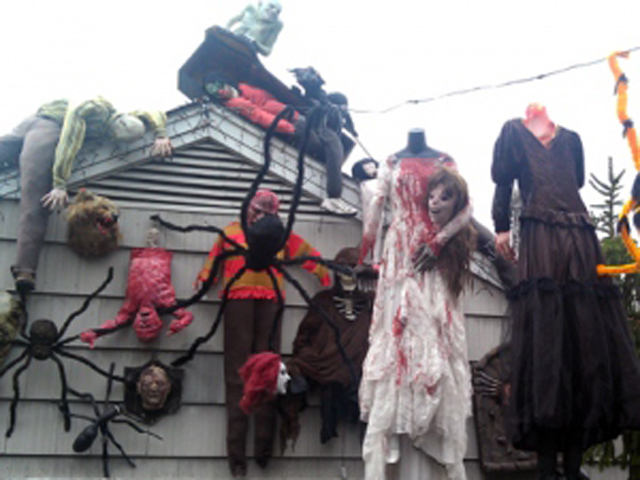 CLIFTON, N.J. A New Jersey home that has made decorating its home for Halloween an annual tradition has come under fire.

The city of Clifton claims that the display on Dr. Wayne Gangi's home, which has been made over into a haunted house during Halloween for over a decade, and brings thousands of visitors, is potentially a traffic hazard for cars and pedestrians, CBS Station New York reported. As a result, police issued numerous traffic summons last year.

City officials have suggested that the display be removed and brought to City Hall to be shown there instead. Matt Watkins, the city's manager, said officials are not trying to halt Gangi's display, which features skeletons, corpses and skulls. Gangi, who is a dentist, turned down the suggestion.

"I'm giving back to the community, something that a lot of people unfortunately in this day and age can't afford to have," he said. "It's just something to see and when people get here they realize there's a lot to look at."

Gangi said the city encouraged him to employ two off-duty officers to handle the traffic at his own expense. "They wanted me to hire several off-duty cops to control the traffic," he said, "because they said they did not have the manpower to offer any in the shifts that led up to Halloween. It's just ironic that when I was adverse to that they had five to six cars at any given point circling my house like sharks."

Watkins admitted that the dentist is not violating any laws and that he is allowed to show off any display he wants on his property. Meanwhile, a no-parking rule will be implemented from 5 p.m. to midnight in the vicinity prior to and on Halloween.

Gangi said the show must go on. "The little bit of expense it would've cost the town to just furnish me some protection or issues of traffic flow is a drop in the bucket compared to what I've invested in the town as an opportunity for people just to come see."