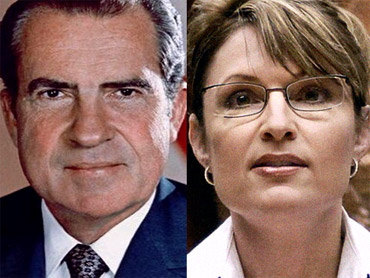 It worked for Richard Nixon. So why shouldn't it work for Sarah Palin?

"It," of course being the depiction of the media - especially the "media elite" - as a pack of troublemakers who rarely let the facts stand in the way of their pursuit of a biased, and likely pro-big government, agenda.

As politics goes, taking a swing at the phonies in the Fourth Estate is a relatively cost-free political exercise. The press - we're usually referred to these days as "the media" - nearly always finish near the bottom of public opinion polls, a smidgen higher than lawyers. In the face of attacks by irked politicians, what interest group is going to rush to the defense of the media? First Amendment lawyers. You get my point.

So it was that during her final speech as Alaska Governor, Palin used the occasion to cuff the press in prime time. After paying tribute to the Alaskans serving in the United States military, Palin contrasted the troops' sacrifice with the ignoble hijinks of those unnamed scribblers and bloviators.

And first, some straight talk for some, just some in the media because another right protected for all of us
is freedom of the press, and you all have such important jobs reporting facts and informing the electorate, and exerting power to influence. You represent what could and should be a respected honest profession that could and should be the cornerstone of our democracy. Democracy depends on you, and that is why, that's why our troops are willing to die for you. So, how 'bout in honor of the American soldier, you quit making things up. And don't underestimate the wisdom of the people, and one other thing for the media, our new governor has a very nice family too, so leave his kids alone.

Now, that's the way to deliver payback. For her core of supporters, dreaming of the 2012 elections, and for conservatives, who tend to believe reporters push a liberal agenda, Palin articulated the raw rage against the elites that has punctuated her 11 months on the national political scene. So it was that Palin, sometimes referred to as one of Ronald Reagan's political offspring, had gotten in the last word in a manner that Nixon would have admired.
Of course, when it came to exploiting popular resentment against the press, Nixon played that game as well as any politician, before or since. Even before the tumult later in the decade, when the counterculture and war in Vietnam dominated headlines, Republicans had complained of liberal bias in media coverage of the Kennedy-Nixon presidential race in 1960. And after losing the 1962 California gubernatorial contest to incumbent Pat Brown, Nixon's frustration boiled over.

Holding what he described as his last press conference, Nixon launched a meandering 16 minute soliloquy oozing with self-pity and contempt for the unfair way he said the media had treated his campaign.

He opened a hastily-called news conference by observing that "now that all the members of the press are so delighted that I have lost, I'd like to make a statement of my own." He went on to say:

"I believe Governor Brown has a heart, even though he believes I do not. I believe he's a good American, even though he feels I am not. I'm proud of the fact that I defended my opponent's patriotism. You gentlemen didn't report it, but I'm proud that I did that. And I would appreciate it for once, gentlemen, if you would just print what I say."....

"I leave you gentleman now and you will write it. You will interpret it. That's your right. But as I leave you I want you to know -- just think how much you're going to be missing. You won't have Nixon to kick around anymore because, gentlemen, this is my last press conference, and it will be one in which I have welcomed the opportunity to test wits with you."

Watching the speech, Brown was reported to have told his wife that Nixon would regret that statement his entire life because the press was never going to let him forget it. While Brown was right - the press never did let Nixon forget his outburst - it mattered little. Turns out that this was not his final press conference. Within a few years, a "new Nixon" was back on the stump campaigning for Republican candidates and in 1968, he won the presidency.

Back to Palin. Was this her final press conference? Don't bet on it. Although no longer on the government payroll, she promises to remain prominent on national issues. Unlike Nixon, who came of age in the post-World War 2 era, the proliferation of social media tools now at Palin's disposal means that she's not as reliant on remaining in the good graces of the media to get her message out.

Along with Barack Obama, Palin remains one of the most fascinating politicians on the scene. And like moths to a flame, the media can't resist the attraction. One day after her final day in office, in fact, MSNBC reported on its "Palin Chronicles" special that the now-private citizen was about to open a new Twitter account.

The media may not love her, but I don't know why that should bother Palin. One way or another, they can't get enough of her.

How smart technology can make us dumb

Commentary: Is it time for term limits on the Supreme Court?