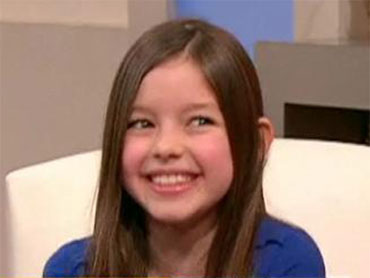 Fatima Ptacek is one of the hottest, highest-paid models around, and has appeared in multiple television shows and movies, reportedly making $250,000 a year.

She is also 9-years-old, and attends fourth grade in a public school in Queens, New York.

This young rising star appeared on "The Early Show" Tuesday and shared what's behind her pretty face.

Ptacek says she wants to become a lawyer, go to Harvard and eventually become the first female president.

But for now, she's modeling and acting, and making her mark on the industry.
Already, she's appeared on "Saturday Night Live" twice, appeared in a Catherine Zeta-Jones movie, has starred in a lead role in the upcoming movie "The Miracle of Spanish Harlem."

And now she's pen pals with Michelle Obama. Ptacek met the Obama on the set of "Sesame Street," where she acted opposite the first lady.

Ptacek said Obama was "very down to earth."

But how does she find the time to do it all?

Ptacek explained to "Early Show" co-anchor Maggie Rodriguez that she tries to do as many things after school as she can. However, if it's really important, she'll get out early or miss school to make a gig.
When Ptacek said she missed school to appear on the broadcast, Rodriguez apologized.

But Ptacek says she's fine with it.

Ptacek is in a program for gifted students at her school and says, "I got to keep up. But I'm doing it."

But what about the money she's making as model. Ptacek's father says she's going to have it when she turns 21, and she has to go to college.

For now, though, Ptacek is doing what she's always done.

She explained, "When I was really young, my parents thought that I was really outgoing and I was always entertaining somebody. And a lot of people were saying, 'Oh, she's so pretty, she should be in movies She's so great. She's so funny.' So my parents found a modeling agency."

Rodriguez remarked that Ptacek has an interesting look.

Ptacek said her mother is from Ecuador and her father is Norwegian, Czechoslovakian, Irish and Columbian.

But Ptacek says she's not different from any other kid - even when she's starring opposite celebrities like Catherine Zeta-Jones.

"I'm pretty humble," she said. "…I don't think I'm different from anybody else."

Ptacek has three brothers and an older sister. She says her brothers are "very protective" of her, and her sister is "there for her a lot" and tells her she's proud of her.

In her sparse spare time, Ptacek likes to read. She told Rodriguez she's just finished the Harry Potter series and is now working on The Sisters Grimm series.

Extreme Skiing: "The Edge of Never"