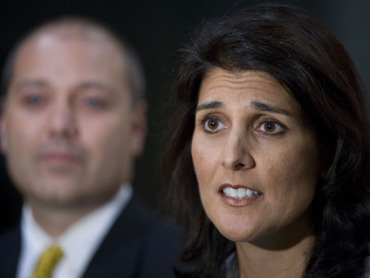 Haley's supporters soon closed ranks around her: Sarah Palin, whose backing gave the candidate a big boost in the polls (Haley sits in first place in at least one poll on the GOP primary contenders), wrote that "for traditional media to rely on an accusation via some blog entry is almost laughable, but I know the seriousness of it because that's exactly what my family and colleagues have had to put up with, every single day, for the past couple of years."

Folks, a former aide to current South Carolina Gov. Mark Sanford (himself no stranger to adultery charges), said in his initial blog post that he had come forward because media outlets were planning to write about the alleged affair. He said he would not be elaborating on what he said initially.

But that hasn't stopped his group-written blog from continuing to cover the allegation and its aftermath. Posted to the site this morning were what are claimed to be text messages between Folks, Wes Donehue (a supporter of one of Haley's rivals), Associated Press reporter Jim Davenport and Haley campaign manager Tim Pearson.

The blog claims that the texts demonstrate the fact that it was the "escalation of the situation that led to [Folks'] decision to admit the affair."

The alleged texts show AP writer Davenport asking Folks about the alleged affair. They also include a text from Haley campaign manager Tim Pearson to Folks that reads, "I'm telling you man, we keep this under wraps and nh is going to win."

Nowhere in the texts, however, is an explicit statement that an affair took place. And there are no alleged text messages from Haley.

Pearson told Politico that the alleged texts reflect the fact that Folks' "overactive imagination has gone into overdrive."

"South Carolina politics is full of rumors and innuendo - and, of course, our campaign did everything in our power to prevent false rumors about Nikki from airing out in the media as they now have," Pearson said.