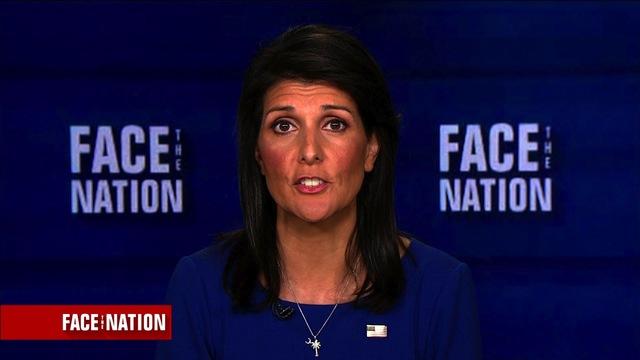 The U.S. Ambassador to the United Nations, Nikki Haley, was asked Saturday what consequences Russia will face as a result of its interference in the 2016 election, and she declined to specify, telling Face the Nation moderator John Dickerson, "I think you're going to have to ask the president."

Haley spoke to Face the Nation as President Trump concluded a three day trip to Europe for the G-20 summit. While he was there, Mr. Trump came face to face with Russian President Vladimir Putin -- the two men have spoken on the phone, but this was their first in-person encounter. During their meeting, which was scheduled to last only 30 minutes but stretched to over two hours, Secretary of State Rex Tillerson said Mr. Trump pressed Putin on Russia's meddling. But the Russians offered a different account - both Putin and the Russian foreign minister said they believed Mr. Trump accepted Putin's denial of Russian involvement.

Haley discussed the apparent disparity between the Russian and American accounts, saying, "I think we need to be realistic about what happened."

Dickerson asked Haley what consequences Russia will face as a result of its meddling.

"Not just Russia," she replied. "Any country needs to know that there are consequences when they get involved in our elections.  And I think that's why it's good that the investigations are going on and we're analyzing and we're looking into all of that, and I think we need to manage it accordingly. The one thing we don't want is for our political process to ever be influenced or tainted in any way. And I think that we have to make sure that we're always strong on that point and let everyone know that we're not going to put up with it."

"But given that the president, as you said, knows that the Russians meddled," Dickerson pressed, "what consequences will they face as a result of that action?"

"I think you're going to have to ask the president," the ambassador responded. "I think that's one of the things is -- first is confronting them, letting them know that we know this happened, letting them know it can't happen again. I know that they had quite a bit of cyber conversation in terms of cyber meddling or cyber abuse during not just political situations, but also from a security situation, and they talked quite a bit on the cyber-attack risk. And so I think we'll see what happens there. You know, keep in mind -- yesterday's meeting was all about talk, but at the end of the day, this is all going to be about actions.  We now have to see where we go from there."

For more of Dickerson's interview with Haley, plus all of the latest news and analysis, tune into Face the Nation this Sunday. Check your local listings for airtimes.