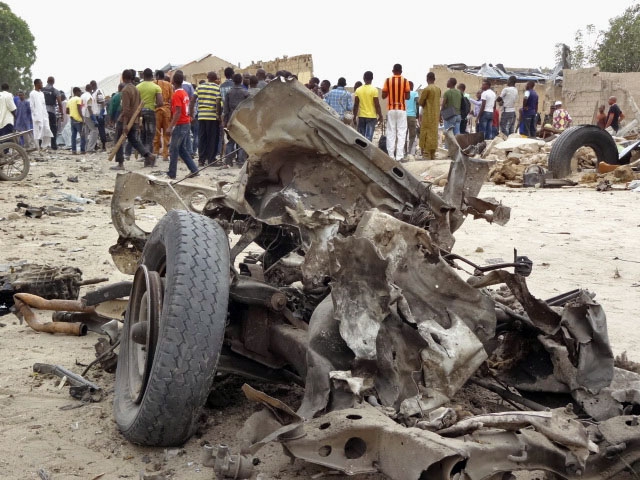 At least 90 people have been killed, officials and survivors reported Sunday, as Nigeria's Islamic extremists step up attacks and criticism mounts of the failure of the military and government to suppress the 4-year-old Islamic uprising in the northeast.

In Maiduguri, capital of Borno state and birthplace of the Boko Haram terrorist network, the attackers chose a densely populated area with narrow alleyways that maximized the blasts and a Saturday night when the market was open late.

The victims included children dancing at a wedding celebration and people watching a soccer match at a cinema, survivors told The Associated Press.

Fifty-one bodies were retrieved by Sunday morning but many more are believed buried in rubble, said a Red Cross official who insisted on anonymity because he was not authorized to speak to the press. Some were burned beyond recognition in fires caused by the explosions.

He said he returned home Sunday to find victims being buried in Mainok village, which has been attacked many times in the past year. A State Security Service agent said no huts were left standing there. He spoke on condition of anonymity because he is not authorized to speak to reporters.

In Maiduguri, the headquarters of the army and air force offensive against Boko Haram, the first bomb came from a pickup truck loaded with firewood, said Hassan Ali, the leader of an anti-terror vigilante group.

Many more people were killed in the second blast, which was timed to catch people who rushed to the aid of those wounded in the first explosion, survivors said.

Survivors said they captured a man who drove the second car to the scene, jumped out, grabbed a tricycle taxi and tried to make off. He was badly beaten and taken to nearby Umaru Shehu General Hospital, where a security guard said all the wounded brought in had died. Most survivors insisted on anonymity for fear of reprisals.

It was not known how many wounded are being treated in three hospitals in the city.

Military and police officials did not immediately offer comment and there was no claim of responsibility from Boko Haram, which communicates only through occasional videos.

The attack is a major setback to the latest army and air force offensive under new commanders since President Goodluck Jonathan fired his entire military command in January.

Since then, criticism and anger have grown as attacks have increased and become ever deadlier: More than 300 people were killed in February alone in the neighboring states of Adamawa and Yobe. Outnumbered soldiers are accused of abandoning checkpoints and leaving civilians at the mercy of extremists in two attacks last week that killed about 100 people, including 59 students at a high school.

Soldiers have complained to the AP that they are outnumbered and are expected to confront militants firing anti-aircraft guns and rocket-propelled grenades armed only with automatic rifles.

Maiduguri has suffered two attacks in the past six months: a Jan. 14 bomb that killed about 40 people and a bold assault Dec. 5 on the air force base and an army barracks on the outskirts in which all five aircraft on the runway were destroyed.

Such attacks have led to accusations by regional officials of collusion between some military officers and the terrorist network that wants to impose Islamic rule across Nigeria, Africa's biggest oil producer and most populous nation of some 170 million people comprising almost equal numbers of Christians and Muslims.

Opposition politicians blame a failure of leadership by Jonathan, whose perceived desire to run for re-election next February has prompted defections from the governing party amid accusations that he plans to flout a party rule alternating leadership between a Muslim northerner and someone like Jonathan, a southern Christian.

The Defense Ministry has blamed recent attacks on militants escaping aerial bombardments and ground assaults to flush them from forest hideouts and mountain caves along the Cameroon border. The military closed hundreds of miles of border with Cameroon last week to stop extremists escaping and using Cameroon soil to launch attacks.

Thousands of people have lost family members, homes, businesses and livelihoods. Tens of thousands have fled their homes, displaced inside Nigeria and dispersed in neighboring countries to get away from the attacks and the military fallout that has killed an unknown number of civilians. Human rights activists accuse the Nigerian military of gross violations, including summary executions and destruction of hundreds of homes in villages they suspect were harboring extremists.

There are fears Nigeria's 4-year-old rebellion could spread. Boko Haram militants already operate in Cameroon, Chad and Niger and lately there have been reports the Nigerian extremists are threatening to defend Muslims in Central African Republic, where French and African troops are trying to end fighting between Muslim and Christian militias.