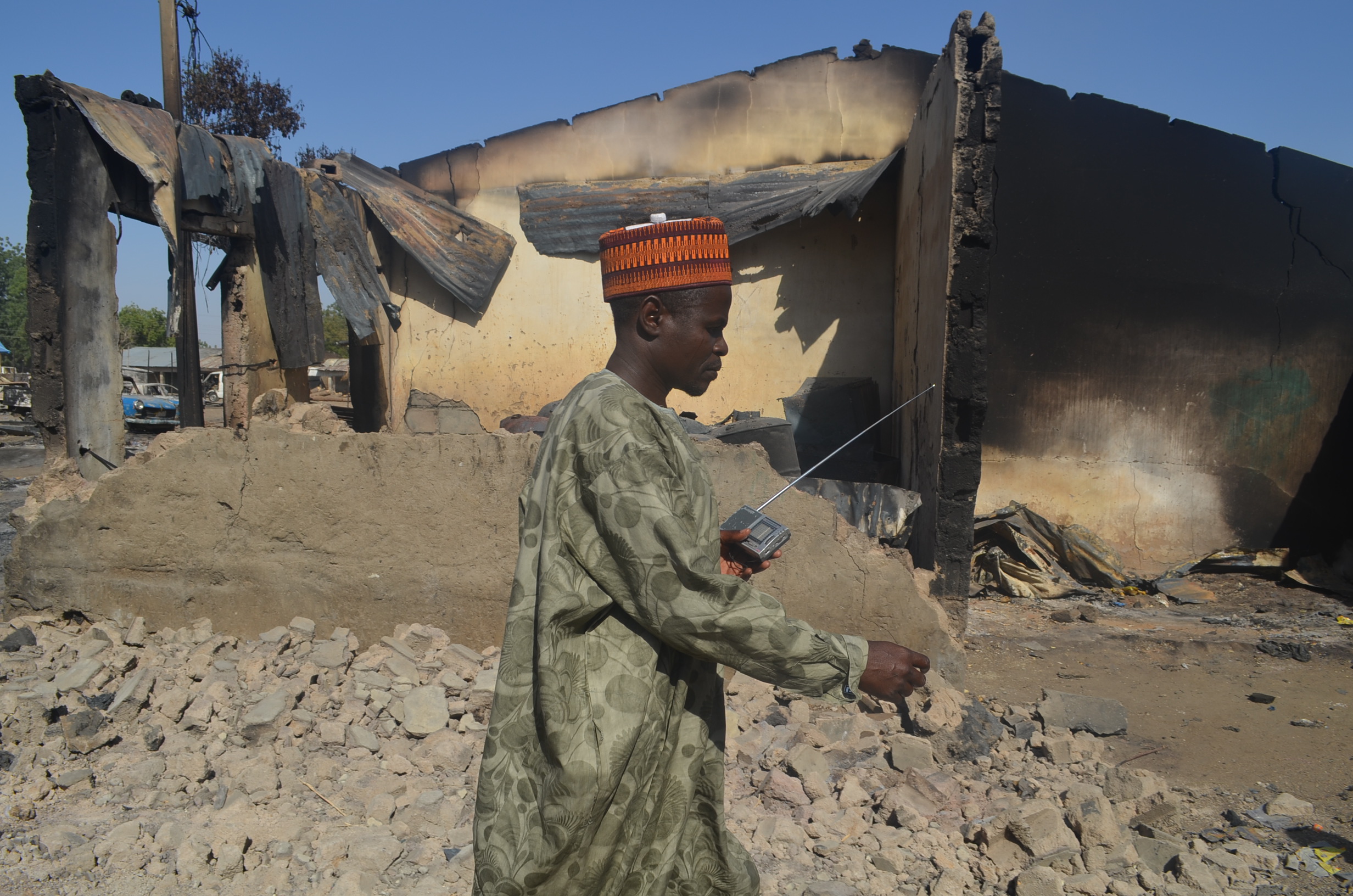 DAMATURU, Nigeria -- Gunmen from Islamist group Boko Haram stormed a boarding school in northeast Nigeria overnight and killed 29 pupils, many of whom died in flames as the school was burned to the ground, police and the military said on Tuesday.

“Some of the students bodies were burned to ashes,” Police Commissioner Sanusi Rufai said of the attack on the Federal Government college of Buni Yadi, a secondary school in Yobe state, near the state's capital city of Damaturu.

Female students were spared in the attack, said spokesman Abdullahi Bego. The attackers went to the female dormitories and told the young women to go home, get married and abandon the Western education they said is anathema to Islam, he said. He was relating to The Associated Press what survivors and community leaders told Gov. Ibrahim Gaidam when he visited the now-deserted and destroyed Federal Government College at Buni Yadi, a secondary school 45 miles south of the state capital, Damaturu..

Soldiers guarding a checkpoint near the government school were mysteriously withdrawn hours before the attack, said Abdullahi Bego, the spokesman for the governor of Yobe state.

The militants locked the door of one dormitory where male students were sleeping and then set it ablaze, slitting the throats of those who tried to clamber out of windows and gunning down those who ran away, said teacher Adamu Garba.

Some students were burned alive in the attack that began around 2 a.m., he said.

Bego said the entire complex of the relatively new school had been burned out by firebombs - six dormitories, the administrative building, staff quarters, classrooms, a clinic and the kitchen.

The governor would be asking questions about why the school apparently was left unprotected, he said.

"The community complained to the governor that yesterday the military were withdrawn and then the attack happened," he said. A group of about eight soldiers manned the checkpoint when an AP reporter visited recently, and the nearest military base was a unit of about 30 soldiers in Buni Gari town, 1.2 miles away.

But soldiers from Damaturu did not arrive until noon, hours after the attackers had finished their work and taken off, according to community leaders who said they buried the bodies of 29 victims. Most appeared to be between 15 and 20 years old, Bego said.

The Islamists, whose struggle for an Islamic state in northern Nigeria has killed thousands and made them the biggest threat to security in Africa's top oil producer, increasingly are preying on the civilian population.

Boko Haram, whose name means “Western education is sinful” in the northern Hausa language, have frequently attacked schools in the past. A similar attack in June in the village of Mamudo left 22 students dead.

In September, suspected Islamic extremists attacked an agricultural college in the same region, gunning down dozens of students as they slept in dormitories and torching classrooms.

More than 200 people were killed in two attacks last week, one in which militants razed a whole village and shot panicked residents as they tried to flee.

A teacher from the school, who escaped with some other staff members, told The Associated Press that he feared as many as 40 pupils might have been killed. Military forces were still on the scene, trying to locate victims.

The failure of the military to protect civilians is fueling anger in the northeast, the region worst affected by the four- and-a-half-year-old insurgency. An offensive ordered by President Goodluck Jonathan in May has failed to crush the rebels and triggered reprisals against civilians.

A military spokesman for Yobe state, Captain Lazarus Eli, confirmed the attack and said “Our men are down there in pursuit of the killers.”

Addressing a news conference on Monday, Jonathan defended the military's record, saying it had had some successes against Boko Haram. He also said Nigeria was working with the Cameroon authorities to try to prevent the militants from mounting attacks in Nigeria and then fleeing over the border.

The military shut the northern part of the border with Cameroon on the weekend. The insurgents mostly occupy the remote, hilly Gwoza area bordering Cameroon, from where they attack civilians they accuse of being pro-government. They have also started abducting scores of girls, a new tactic reminiscent of Uganda's cult-like Lord's Resistance Army in decades past.