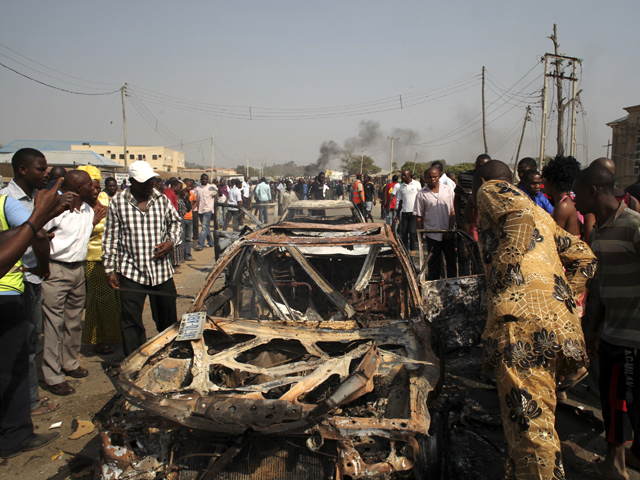 LAGOS, Nigeria - Attackers stormed a federal prison in Nigeria with heavy gunfire and explosives, killing one guard and freeing 119 inmates in a new assault demonstrating the continued instability in the nation, an official said Thursday.

The gunmen attacked just after 7 p.m. Wednesday, blasting through the prison gate with a bomb and killing one guard in the process, officials said.

Those inside the prison escaped in the fighting, though authorities had recaptured about 25 of them by late Thursday afternoon, local prison official Hadiza Aminu said.

The government said an investigation had begun into the attack in Koton-Karifi, a town in Kogi state just south of Nigeria's capital of Abuja.

"One does not really know why" the gunmen attacked, Nigeria Prisons Service spokesman Kayode Odeyemi said. "It might be that some of the armed robbers are trying to free the armed robbers there awaiting trial."

No group immediately claimed responsibility for the prison attack, nor did authorities say they had any suspects immediately in mind.

The prison held armed robbers and kidnappers, Odeyemi said. He said he did not know if the prison held any members of a radical Islamist sect known as Boko Haram, which has been plaguing the country with violence over the last year.

Boko Haram launched a massive prison break in Bauchi state in September 2010 that freed about 700 inmates there. The style of Wednesday's attack, which apparently used explosives and heavy gunfire, matched that previous assault by the sect.

Members of the sect have been blamed for killing at least 286 people this year alone, according to an Associated Press count. The group's leader says its campaign of violence is aimed at avenging Muslim deaths, freeing imprisoned members and pushing for strict Shariah law across multiethnic Nigeria, a nation of more than 160 million people.

If Boko Haram carried out Wednesday night's attack, it would be the farthest strike south the group has made. Nigeria is largely split between a Christian south and a Muslim north, and most of Boko Haram's previous attacks have taken place largely in the north.

Nigeria's prisons remain overcrowded and understaffed, with the majority of those imprisoned awaiting trials for years that likely will never come. A 2007 study by Amnesty International called the system "appalling," with children remaining locked up with their parents and guards routinely bribed by inmates. Despite pledges by the government to reform the system, it remains largely the same today.