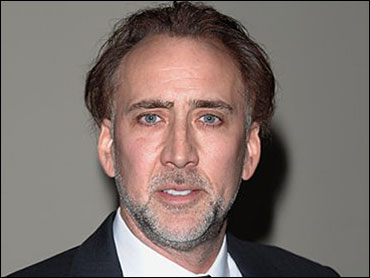 Nicolas Cage's ex-girlfriend is suing the actor and his former business manager, claiming she is owed more than $13 million and a house the actor promised her.

Christina Fulton, who is the mother of Cage's adult son, Weston, sued the Oscar winner in Los Angeles on Tuesday. She claims Cage promised her a home in Los Angeles' Hancock Park neighborhood, but that she has now been ordered to leave the property.

Fulton is seeking the title and rights to the house as well as money for a series of debts she claims were caused by Cage's former business manager, Samuel J. Levin.

Cage's attorney, Marty Singer, called Fulton's claims against the actor absurd and said Cage has given her far more than the $6,000 per month he was required to pay her under a court order. Cage has paid $3 million per year on behalf of Fulton in recent years, he said.

"From Nic's standpoint, this is really a case of 'No good deed goes unpunished,"' Singer said.

He noted that many of the claims are leveled against Levin, whose attorney, Joseph Schleimer, did not respond to a phone message seeking comment on Wednesday.

Fulton's lawsuit is the latest in a string of financial woes for Cage, who stated in a $20 million lawsuit against Levin that he is being forced to sell properties around the world to make up for financial mismanagement. The Internal Revenue Service has filed more than $6.6 million in tax liens against the actor this year, records show.

Levin has countersued Cage, claiming the star owes him money and failed to heed his advice to curb his lavish spending habits.

Fulton and Cage's son was born in 1990, and the couple split about four years later, her lawsuit states.

Cage bought her a home in 2001 and told her she would own the title to the property, according to the lawsuit. It wasn't until earlier this year - when the actor told her in an e-mail that she should sell the home if she was having financial problems - that Fulton states she discovered her name wasn't on the title.

Foreclosure proceedings have begun on the home.

Cage is known for his dramatic roles in films such as "Leaving Las Vegas" and "Adaptation" as well as action turns in "The Rock" and "Con Air.
By Anthony McCartney