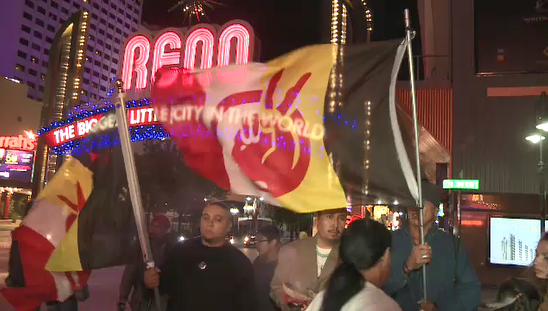 RENO Reno police say an 18-year-old man accused of driving a pickup truck into a crowd of protesters rallying in support of Native American rights has been arrested.

Reno Police Chief Jason Soto says warrants have been issued for the arrest of three individuals, the driver of the truck and two protesters, in connection with Monday night’s incident in downtown Reno, CBS affiliate KTVN reports.

The driver has been identified as 18 year old Nick Mahaffey. Records show Mahaffey was booked into custody Friday with one charge of provoke assault. He was released on $1,000 bail.

The two protesters identified are James Fletcher and Samuel Harry both are being charged for simple battery.

Reno City Attorney Carl Hall was also present at the press briefing. No questions were taken at this time.

Chief Soto walked the crowd through the events of Monday night’s protest after several days of investigation:

At approximately 6:40 p.m. Monday, Reno police responded to the downtown arch on reports that a vehicle drove through a crowd of protesters on Virginia Street during a Columbus Day parade.

Some of the protesters were from the American Indian Movement of Northern Nevada. According to Raquel Arthur of the American Indian Movement, the protest was being held to abolish Columbus Day and to bring awareness to hate against indigenous people. Chief Soto has added that many of the protesters had gathered peacefully on the plaza for about an hour to an hour and a half before the incident. Mahaffey and his 17-year-old passenger did briefly attend the peaceful protest.

The group walked several blocks to the arch down Virginia Street, with several people walking in the north bound lane blocking traffic. During this walk, Mahaffey’s vehicle passes the group and words are exchanged, including the shouting of expletives.

Minutes later, police say approximately 40 people were blocking Virginia Street at the arch. The group initially came to take a photograph though some protesters told the police department that they did plan on blocking the traffic for upwards of two hours.

The driver of a Nissan pickup, now identified as Mahaffey, was heading southbound on Virginia Street when he stopped in front of the demonstration. Police say that he approached in an “antagonistic” manner honking his horn and revving his engine. Several protesters approached the vehicle, and a confrontation ensued between the driver and protesters. While some urged him to take another route, others can be heard threatening to remove Mahaffey from his vehicle or to perform acts of violence.

Chief Soto makes mention that during the verbal confrontation no mention of race or religion was made by any parties involved.

As the confrontation escalates, James Fletcher is observed attempting to open the driver’s door and then punching Mahaffey in the face. The 17-year-old passenger was also punched in the face.

Mahaffey says that he lurched his vehicle forward, as seen in the videos, to urge the group to clear his path so he could leave what he felt to be a threat to his safety. Then he drive through the crowd injuring a 59-year-old woman who was taken to Renown. She suffered non-life threatening injuries to her lower body. Several others also reported injuries but were treated on scene.

Mahaffey stopped several blocks away and called the police to report the incident. Police and medical services arrived on scene within minutes.

This incident sparked many discussions on social media as well as a second protest at the Reno Police Department the following night. Paul Nelson has that part of the story:

“It was his duty as a citizen, not to escalate it but to de-escalate it and back out as he should have, knowing the fact that if he went forward, he was going to risk someone’s life,” Mike Graham, Founder of United Native America said.

Meanwhile, many have taken to social media, saying it was up to the protesters to move out of the way, since they were breaking the law by disrupting traffic. The protesters did not have a permit.

Raquel Arthur of the American Indian Movement, says the protest started at the City Plaza and moved downtown under the Reno Arch. They say they were gathered in the crosswalk to take a photograph when two individuals in a vehicle approached them and were hostile to the group.