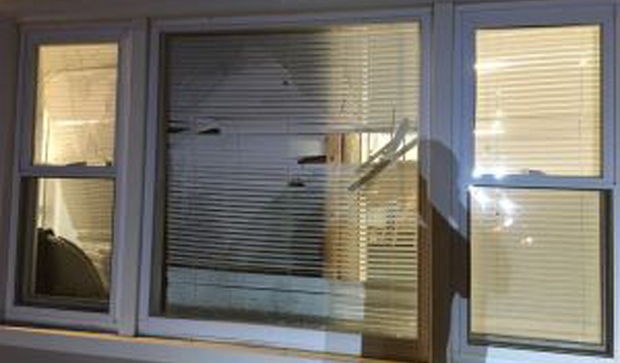 SOUTH KINGSTOWN, R.I. -- A Muslim cultural center near the University of Rhode Island was the target of vandalism overnight, reports CBS affiliate WPRI.

Mosque members said they discovered the vandalism at the Muslim Community Center of Kingston's Masjid Al-Hoda not long after Thursday night's attack that killed at least 84 people in Nice, France.

Windows were smashed and an anti-Muslim message was spray-painted on its front-facing wall: "Muhammad prophet of butchers."

Police responded to the scene at about 11 p.m. after the vandalism was reported by neighbors who heard and saw what happened. An eyewitness told police a lone perpetrator wearing all back with a hood covering his or her head used what appeared to be a long-handled ax to break the window, according to WPRI.

Police reportedly checked the immediate area, but were unable to locate any possible suspects.

Mosque spokesman Nasser Zawia said nothing like this has happened since the place of worship was founded in 2001.

"Our community has been there since midnight, working on cleaning it," he said Friday. "We've never faced anything like this."

"Our community would really just like to convey to their neighbors we know this is isolated, and we are not afraid," Zawua added. "We just need to educate those ignorant elements that act on their own and are angry. But we don't harbor any ill feelings towards anyone and we let the law take its course."

The center has since reported the vandalism to the Massachusetts chapter of the Council on American-Islamic Relations. The organization has also condemned Thursday's attack in Nice, France.

The advocacy organization called on state and federal law enforcement to investigate the vandalism as a possible hate crime and to increase police patrols to protect Muslim institutions around the country.

Anyone with information about the incident is urged to call the South Kingstowm Police Department at (401) 783-3321.