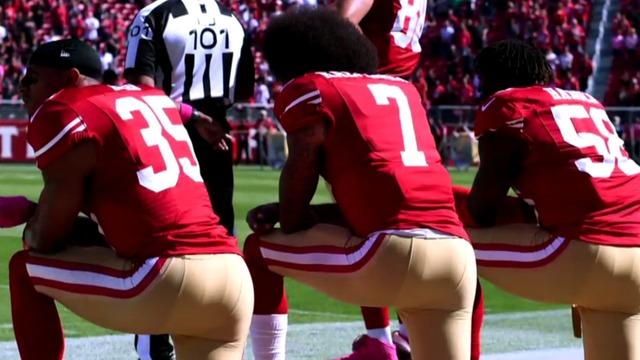 A majority of voters don't believe NFL players who kneel during the national anthem to protest police shootings of unarmed black men are unpatriotic, according to a new Quinnipiac University poll. President Trump has highlighted the controversy for months now, suggesting players who kneel are disrespectful of the flag and perhaps should go elsewhere if they don't like the U.S.

The NFL's decision to impose fines on the teams of players who kneel, a decision Mr. Trump praised, fanned the flames of the cultural controversy. And earlier this week, the president rescinded the Philadelphia Eagles' invitation to the White House, hosting a ceremony supporting the national anthem instead.

The Quinnipiac poll found that 58 percent of voters don't think players who kneel are being unpatriotic, compared to 35 percent who do. The divide falls along political and racial lines.

Voters are more likely than not to say professional athletes have the right to protest, with 53 percent saying players hold that right and 43 percent saying they do not. That split again falls mostly along party lines, with Republicans saying the players have no right, and Democrats saying they do. Similarly, most Republicans support the NFL's decision to fine teams if players refuse to stand for the anthem, while most Democrats oppose it.

But the issue is also divided along racial lines. Black voters agree, 85 percent to 11 percent, that players have the right to protest. Hispanic voters also agree players have the right to protest, 67 percent to 28 percent. But white voters are more likely to say players do not have that right, with 53 percent saying players lack such a right and 43 percent saying they possess such a right.

"Voters are clearly torn on the national anthem issue," said Tim Malloy, assistant director of the Quinnipiac University Poll. "As for teams that defy the new rule, Americans say, 'Don't throw a flag on them.'"