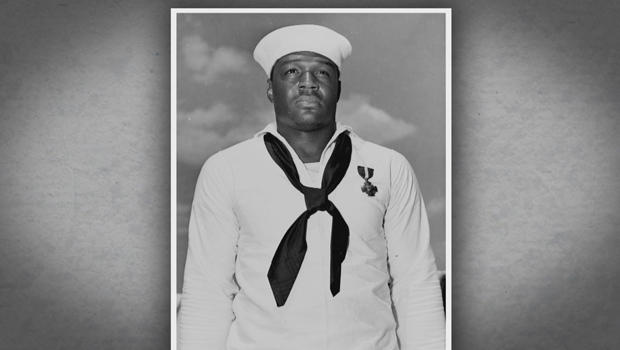 The aircraft carrier is the symbol of American power – 90,000 tons of diplomacy, the Navy likes to say. Almost all of them are named after presidents – until Acting Secretary of the Navy Thomas Modly broke with tradition.

"Exactly right, and I like it when you put it that way," said Modly.

That's Miller as in Dorie Miller. The next aircraft carrier to be built will be named for the grandson of slaves and a son of sharecroppers. The official announcement is on Monday, Martin Luther King Jr.'s birthday, at Pearl Harbor.

And Dorie's closest surviving relatives, Florietta Miller and Brenda Haven, are still getting used to having a carrier named after their Uncle Dorie, who served in the segregated Navy in World War II. "That's a great honor," said Haven. "because it's been a long, hard road."

Miller was born in Waco, Texas – and his first name was actually Doris.

The name, said Haven, came from Miller's mother: "Grandmother thought she was having a girl. And it wasn't a girl! Doris turned out to be a boy, so that's where that name came from," she laughed.

Waco has been described in those years as the place where the Old South met the Wild West, and like much of America back then, Jim Crow ruled.

There were no economic opportunities for a young black man, so he joined the Navy; at least there the pay was steady.

"Navy policy at that time limited blacks to those duties that were manual, that they thought didn't require a whole lot of intellect," said Regina Akers, a historian with the Naval History and Heritage Command. "When Dorie Miller came in, he was limited to the Messman's branch pretty much."

"What does a mess attendant do?" asked Martin.

"Basically a mess attendant takes care of an officer," Akers said. "You lay out his clothes, you shine his shoes, and then you serve in the officers' mess."

Miller served aboard the battleship West Virginia which on Sunday morning, December 7, 1941, was tied up on "Battleship Row" in Pearl Harbor.

Miller has just finished serving breakfast, and was sorting laundry when the West Virginia was hit by nine Japanese torpedoes and two bombs. Miller was ordered to the bridge to evacuate the ship's captain, who lay mortally wounded.

As the air attack continued, against all rules, Miller manned a .50-caliber Browning anti-aircraft machine gun and fired on the Japanese planes. He also helped carry and move injured sailors to safety.

"The irony of this is that, back in the '40s, pre-World War II, African Americans were not allowed to have any jobs where they handled machine guns or any type of lethal force," said Modly.

When the Navy, which Miller had joined in 1939, awarded medals to those who had fought bravely, it didn't even mention the name Doris Miller.

Martin asked, "Why wouldn't the Navy right from the start at least identify him by name instead of calling him 'an unknown Negro sailor'?"

"Well, you would have to be a Negro in 1939 to understand that," said Akers. "The status of African Americans, they were treated like second-class citizens."

Four months later, the Pittsburgh Courier, perhaps the leading African American newspaper of the day, finally published the sailor's name and the Navy grudgingly gave him a letter of commendation.

"In his opinion that's all he warranted," Akers said. "However, others disagreed. The press, black and white press, disagreed, the National Association for the Advancement of Colored People disagreed."

As recorded on Miller's service card in the Navy Archives, President Roosevelt stepped in and ordered him awarded the Navy Cross. "That was not without controversy," Modly said. "There were some people who did not want him to receive the Navy Cross, because of his race."

He received the medal from Admiral Chester Nimitz, who noted Miller was the first person of his race to receive such a high honor.

Akers said, "He understood the importance of having a black hero to encourage other blacks to support the Navy's war effort."

Miller went on a speaking tour and became a black celebrity in the same league as heavyweight champion Joe Louis and singer Lena Horne.

Akers said, "Some considered him just as important, just as aspirational, drew just as much hope from him."

Was he comfortable with his celebrity? "No, not at all," Akers said. "His goal was really to get to his next ship."

Miller was assigned to the aircraft carrier Liscome Bay, which less than a year after Pearl Harbor, was sunk by a Japanese torpedo.  Dorie Miller was never seen again.

Haven said, "It's kind of hard thinking of my grandmother, her hurt. She used to say, 'Had I been a white woman, they would have treated me better. But I'm a black woman, and my son is a hero.'"

Over the years his legacy has been honored, including in a larger-than-life statute in his hometown of Waco, but that's nothing like having an aircraft carrier named after him. There are currently 11 aircraft carriers – an honor reserved for very few Americans. "Absolutely," said Modly.

The last carrier to be christened was the USS. John F. Kennedy, by his daughter Caroline.

Construction has not yet begun on the USS Doris Miller; it will be seven or eight years before the ship gets into the water. It will be expected to sail the world for 50 years.

Akers said, "Like everything else that's celebrated about Dorie Miller, it's gonna draw some criticism, rest assured."

"What would be the criticism?" asked Martin.

"Some may suggest it's more than he deserves. Some may say he was just a guy who did his job when general quarters went off on a shi;, 'What's the big deal?'"

"What was your personal reaction?"

"Oh, I was overwhelmed," said Akers. "It is tremendous, and it's a reminder, too, that heroism is in no way limited by race, by gender, by background, by rank or rating."