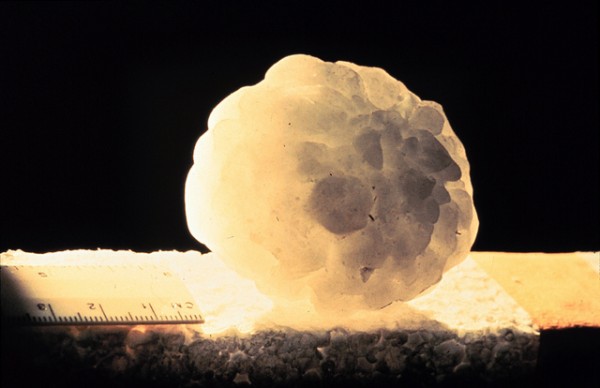 Bacteria are everywhere--in us, on us, around us. But they're also floating around in the atmosphere, and researchers cracking open hailstones have now discovered them at the core, lending credence to the theory that bacteria jump-start the atmospheric process of forming snow, hail, and rain as a way to hitch a ride down to Earth.

We've long known that bacteria are involved in precipitation--scientists have been studying the idea since the 60s. But only in recent years have we begun to piece the relationship together.

In 2008, a landmark study analyzed the bacterial populations of 19 snowfalls, running tests to see how the microbes affected the freezing of water.

They found that some bacteria dramatically increased the temperature at which ice crystals form; for instance, in the presence of Pseudomonas syringae, ice crystals, which normal require a frigid -40 C, can grow at a balmy -2 C. Bacteria could be catalyzing the formation of ice in the atmosphere, helping cause precipitation. And such organisms are pervasive: the team found bacteria in snow from all over the world. The lead researcher of that study, Brent Christner of Louisiana State University, told Nature News in 2008:

"It is a wake-up call reminding us that some of the most active catalysts in clouds are being widely ignored, says Christner. "Biological particles do seem to play a very important part in generating snowfall and rain, especially at relatively warm cloud temperatures."

Now, researchers announced at a panel at the American Society of Microbiology Meeting yesterday that they've found bacteria concentrated in the cores of hailstones, which are the first parts of the little ice balls to form. This provides further evidence that bacteria catalyze the formation of precipitation.

Crystals, which are made of tightly organized molecules, often need a little help getting started. Ice crystals can form around specks of dust (if you ever melt a hailstone, you'll find flecks of grit in the water), but bacteria provide an even easier way to start the process. They have proteins on their surfaces that mimic the shape of water molecules, so water will glom onto them and provide a scaffold for further water molecules to bind, starting to build a crystal. Scientists think that the ability to freeze water at high temperatures helps bacteria wound the leaves of the plants they feed on and thus gain access.

Why do bacteria piggyback on precipitation? That's a poser, but an intriguing possibility is that they use it to get around, rising into the atmosphere with water vapor, traveling to another area, and then dive-bombing into a new habitat.

Further research into the interplay of bacteria and precipitation, and possibly some quirky commercial applications: P. syringae proteins have long been used in a mixture that ski resorts pour into snow-making machines to jump-start their own localized precipitation.