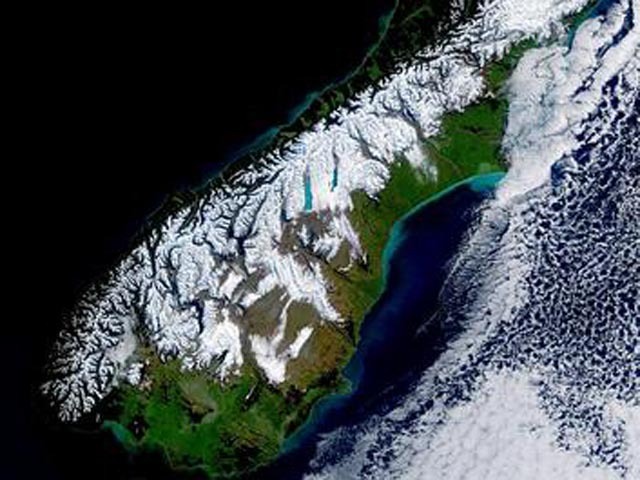 WELLINGTON, New Zealand — When researchers in New Zealand drilled deep into an earthquake fault, they stumbled upon a discovery they say could provide a significant new energy source for the South Pacific nation.

The scientists found the water in the Alpine Fault was much hotter than expected, and could potentially be harnessed to generate electricity or provide direct heating in industries like dairy farming.

The finding was surprising because geothermal energy is usually associated with volcanic activity, but there are no volcanoes where the scientists drilled. Because the Alpine Fault stretches for hundreds of miles like a spine along the country's South Island, the energy source could be enormous.

Led by Victoria University of Wellington professor Rupert Sutherland, the study was published Thursday in the journal Nature.

Sutherland said the intention of the study near the popular tourist destination of Franz Josef Glacier was to collect rock cores and install monitoring equipment rather than gauge water temperatures, but researchers are excited about their unexpected findings.

"Economically, it could be very significant for New Zealand," Sutherland told The Associated Press in an interview. "It's a totally new paradigm."

In their study, the scientists say they believe two actions are creating the hot water.

First, they say, previous earthquakes have moved hot rocks up from deep within the Earth into the mountains along the fault line.

Second, the shaking has broken up the rocks, allowing rain water and snow melt to quickly percolate through the hot interior of the mountains, which concentrates the heat beneath the valleys.

Sutherland said they found the water in the fault reached 100 degrees Celsius (212 Fahrenheit) at a depth of 630 meters (2,100 feet). Water typically gets progressively hotter with depth, but under normal conditions it doesn't reach that temperature until about 3 kilometers (2 miles) underground.

One hundred Celsius is boiling point on the Earth's surface, although water doesn't boil underground because it remains under pressure, much like the liquid inside a pressure cooker.

The Alpine Fault is among the most active faults in the world. It typically creates large earthquakes about once every 300 years, and scientists figure there is about a one-third chance it will rupture again in the next few decades. The resulting quake could devastate some New Zealand towns, although the fault is not located near any large cities.

Sutherland said the discovery of the hot water doesn't have any bearing on predicting when the next quake might hit.

He said before any commercial ventures begin, scientists will need to determine the extent of the hot water, what purposes it could be used for, how easy it is to extract, and whether it can be done safely. He said he didn't think removing water from the fault would risk triggering a quake but scientists would need to study that question as well.

New Zealand already generates about 15 percent of its electricity from geothermal sources, most of it from the Taupo volcanic zone in the central North Island. Sutherland said the declining coal mining industry in the South Island could provide needed expertise, engineering and infrastructure for any new geothermal ventures on the Alpine Fault.

He said the hot water could potentially be used by the dairy industry as a heating source to dry milk. Milk powder is one of the nation's largest exports: in fact, 56 percent of New Zealand's total dairy revenue comes from milk powder, according to government statistics from 2013.

Dave Craw, a professor at New Zealand's University of Otago who was not involved in the study, said that in a global context, the high temperatures found in the fault are very unusual.

"The famous San Andreas Fault of California was drilled in a similar way to this New Zealand borehole, and the temperatures and thermal gradient encountered there were much lower than the Alpine Fault," Craw wrote in an email. "The Alpine Fault is a spectacular thermal anomaly for an area without active volcanic activity."

Bill Ellsworth, a professor at Stanford University who helped review safety aspects of the study but who was not involved in the research, said that because elevated fluid pressures weaken faults, the study's findings also have important implications for understanding the workings of quakes on similar faults around the world.