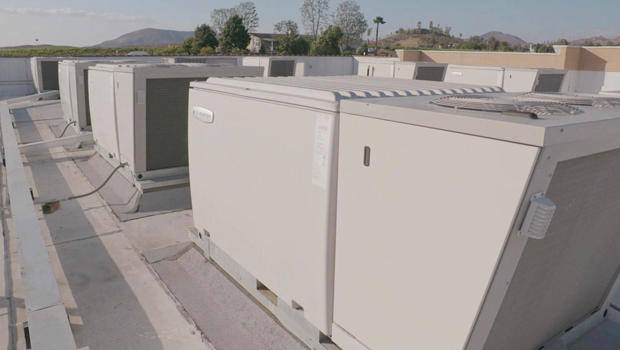 Many experts in electricity are truly JUICED these days. They’re pursuing the “Search For The Super Battery” -- the title of this Wednesday night’s episode of “Nova” on PBS, hosted by our own David Pogue of Yahoo Tech.  We have a preview:

You probably grew up thinking that batteries are those things we put in flashlights, or maybe the rechargeable ones that come in phones and laptops.

But lately, batteries have been popping up in much bigger gadgets, like electric cars.

And now it’s time to install batteries into the biggest machine of all: The United States’ electrical grid -- that huge, aging, complex network of power plants and wires that bring power to our homes and buildings.

And why would our national power system need batteries? Two gigantic reasons.

“I’m sure you know the electricity system has huge surpluses in it at nighttime, actually, that have to be literally wasted. It has terrible deficits at other times of day, peak hours,” said Hopkins. “How do you know that? Blackouts.”

That’s the first reason we need batteries on the electrical grid: to even out the supply-and-demand, to time-shift the availability of power from nighttime to daytime.

But reason number two is even more important to our future: Power-plant batteries would eliminate the biggest problem with solar power and wind power, which is that they are both intermittent. “Clouds come over on a sunny day and, all of a sudden, it’s gone,” said Hopkins. “Wind stops blowing, all of a sudden, it’s gone. You need a way to store it.”

Some have proposed using huge banks of regular rechargeable batteries, like the ones in our cellphones. But that’s massively expensive, and their lifespan is far too short.

Which is why some companies have begun creating batteries that don’t look like batteries. In Bath County, Virginia, they’ve set up a dam and two reservoirs. During the day, when people need power, the water flows downhill, spinning turbines and generating electricity. Then at night, when power is cheap, they pump the water back uphill. They call this system “pumped hydro.”

Unfortunately, pumped hydro works only in a few places, where they have upper and lower reservoirs.

But American inventors aren’t finished yet. Which brings us back to Mike Hopkins, who claims to have a new battery that is environmentally perfect, can be charged and recharged infinitely (unlike a regular battery), and is way cheaper than lithium ion.

Here’s the big surprise: The newfound technology is a block of ice. “A beautiful block of ice!” Hopkins said.

Hopkins’ company is called Ice Energy. He invited Pogue to a winery in Temecula, California, to show his product: the Ice Bear, basically a huge bathtub that freezes water solid overnight when energy is very cheap.

“The way it works is that during the heat of the day, after this is ice, you get to the heat of the day, and this device is connected to that device, which is just a common conventional rooftop air conditioner. That air conditioner doesn’t have to create cooling; it’s getting ice-cold refrigerant from the melting ice over in this device, using only five percent of the electricity.”

In other words, these 10 ice batteries replace the winery’s air conditioners for six hours a day. As a result, the winery saves electricity and lowers greenhouse gases by 20 tons a year. That’s an important step in fighting climate change.

Now, thawing ice isn’t the only force of nature that can store grid energy.

Seth Sanders is the co-founder of Amber Kinetics, near San Francisco. Amber Kinetics uses cheap electricity at night to spin enormous flywheels. Then, during the day, a generator captures that momentum. As the flywheel slows down, the generator creates electricity.

The flywheels, which weigh about five thousand pounds, spin at several thousands RPMs.

But the coolest part is how they keep friction from slowing down that big steel wheel. First, a huge magnet levitates that 5,000-pound wheel, so that it’s just barely resting on its bearings. Second, they seal the flywheel into a vacuum chamber, so there’s no air friction, either.

Each flywheel can store about four hours of electricity.  The result: a battery that never loses charging capacity, can’t catch fire, and lasts for decades.

All over the world, the quest is on to invent storage for our electrical network: something cheap, that stores a lot, and lasts for decades. It might be gravity, or ice, or spinning disks, or some other idea ... or maybe all of the above. But once we have them, we can reduce blackouts, cut down on pollution, capture the power of the wind, and let solar power really start to shine.

“Nova: Search for the Super Battery” airs February 1 on PBS. Check your local listings for stations and time.