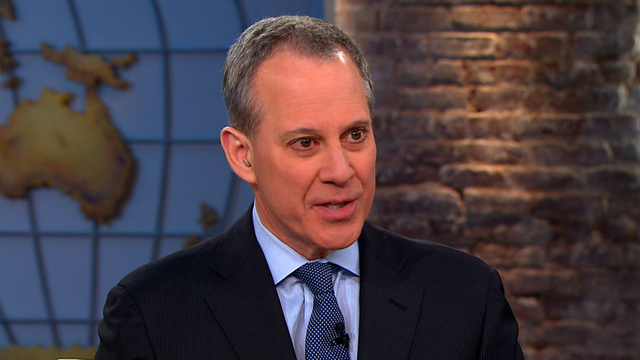 Following "60 Minutes"' bombshell report that showed how a few stock market insiders are making billions in high-frequency trading, New York State Attorney General Eric Schneiderman addressed his own reservations about some uses of the practice on "CBS This Morning."

"Some of it, I believe, may be illegal," Schneiderman said. "Our offices had an investigation for over a year into some practices related to high-frequency trading. ... There are situations where there really may be some illegal conduct and we are looking at it under New York securities laws."

High-frequency trading is based on information that reaches insiders a fraction of a second ahead of everyone else -- just long enough to cash in, while raising costs for ordinary investors.

Lewis told Kroft, "If it wasn't complicated, it wouldn't be allowed to happen. The complexity disguises what is happening. If it's so complicated you can't understand it, then you can't question it."

High-frequency trading practices are being investigated, but are not, in essence, illegal, according to Schneiderman.
"High-frequency trading in the sense of fast electronic orders has been around for a while -- not illegal," Schneiderman said. "What Michael (Lewis) is talking about are high-frequency traders who use their speed to take advantage of cracks in the foundations of our market. As I think he explained in the '60 Minutes' piece, we now have more than 60 public and private markets that are linked up and there are cracks.

"There are places you can get to faster than other people, and front-run the market," he continued. "What's improper is front-running the market...using any special advantage or edge with your speed to have an unfair advantage over anyone else. There's an assumption in the markets that everyone's allowed to do research, but they are fundamentally fair."

"We found that Thomson Reuters, which releases surveys of consumer confidence, was giving a two-second edge to an elite group of subscribers, and in that two seconds, the high-frequency traders were able to move the markets," Schneiderman said. "To their credit, Thomson Reuters stopped doing that."

Going forward, Schneiderman said the recent report and Lewis' book shine a light on the problem as they continue to investigate what currently may be illegal and also what reforms and new laws need to be implemented to catch up with the technology now available.

So who are the high-frequency traders?

They're in firms all around the world.

"They're massive investments and there's an incredible race for speed now," Schneiderman said. "People are paying hundreds of millions of dollars to shave milliseconds off. It's used by all different kinds of firms including some perfectly legitimate firms. But the high-frequency traders are this amazing combination of scientists and analysts that are just shaving speed every day."

To combat that advantage, some -- such as IEX (the investor's exchange) founder Brad Katsuyama, who was featured in the "60 Minutes" report -- are implementing blocks called "speed bumps" to slow down trading.

"There are different ways to build speed bumps," Schneiderman said. "I proposed a different kind than what IEX is using, but it's clear to me that we need speed bumps for two reasons -- we can prevent unfair advantage, and we can avoid the destabilizing effect that high-frequency trading can have because in this race for speed it provides an incentive for people to engage in more and more risky behavior to shave those milliseconds, and as we know, that can produce flash crashes and other problems."

"CBS This Morning" co-host Charlie Rose asked, "These are fractions of a second?"

"Incomprehensible," Schneiderman replied. "Really milliseconds are something you can't even get your mind around, but boy, can they move markets with these automated robotic computers that are just triggered to shoot out offers and shoot out trades as soon as one factor changes."