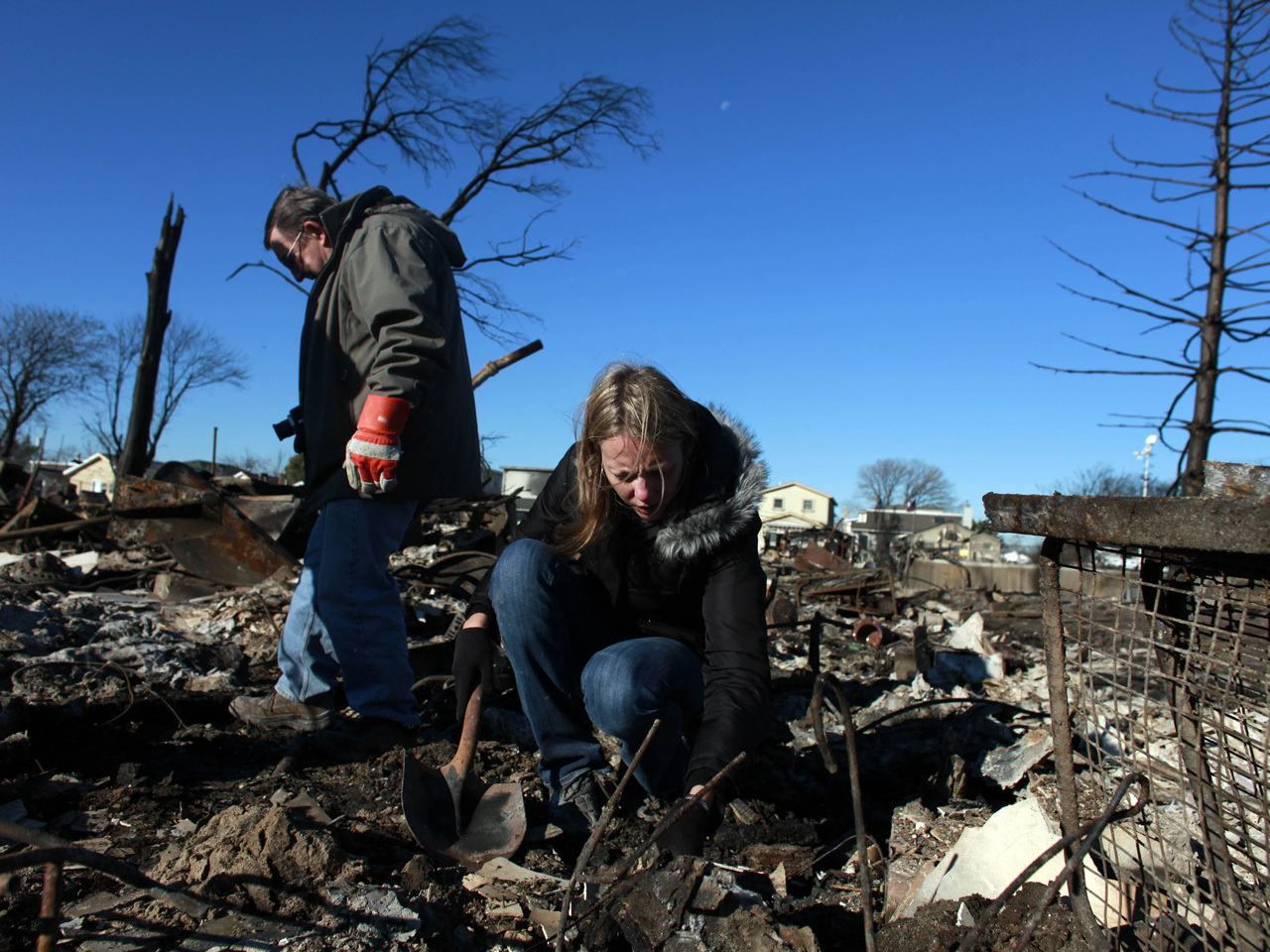 NEW YORK Tragedy has too often visited one Queens community, but residents drew a line in the sand with Superstorm Sandy, rallying with a surfboard and kayaks at the storm's peak to rescue themselves as a fire engulfed 14 homes and flaming embers came at them like a torch.

"We heard screaming and crying in the dark," 55-year-old Thomas Buell recalled as he explained the midnight march through 4-foot-high flood waters in Belle Harbor by dozens of residents to reach a yacht club on higher ground. "It was a nightmare."

People here know disaster. On these few blocks of beach community that's home to many emergency responders, the Sept. 11 attacks hit hard, followed weeks later by a plane crash in the area that killed 265 people and now Superstorm Sandy, which took lives and touched off fires that destroyed about two dozen homes.

But the rescues are the talk of the community, even as residents continue their cleanup, stacking destroyed belongings up to 20 feet high outside their ruined homes.

The heroism included Tommy Woods, who put his 82-year-old mother on a surfboard and ferried her several blocks to his brother's home through the chilly waters.

"He did a good job," Charlie Moran said, speaking quietly and reverently of his nephew, as he stood near the charred wood and concrete that was all that remained of the mostly two-story homes. A blackened firefighter statuette stood guard in front of one home's skeletal remains.

After rescuing his mother and 15-year-old son with the surfboard, Woods returned to the street where homes were burning to the ground to help a neighbor's mother get out by putting her in a kayak and walking her to safety, said Moran, a retired firefighter.

Several men in the burning homes went door-to-door to get everyone out.

Down the street, unaware of Woods' heroics, Buell and his neighbor Troy Bradwisch joined three other men wearing waist-high fisherman's waders to ferry people through the rolling waters to the Belle Harbor Yacht Club. Dozens of others, including an 86-year-old man, formed a human chain and trudged through the water, clutching neighbors to make sure no one was lost.

"There was a lot of current, but people were close together, holding on to each other," Buell said.

"Up the block it was like the apocalypse," he said, explaining why no one protested the move to the yacht club, a social club built high enough to remain dry even after the waters of the ocean met Jamaica Bay. He said the wind-driven storm and subsequent flood at high tide combined with a fire that produced grapefruit-size flaming flakes and clouds of smoke, distorting perceptions and making it impossible to know how near the fire was. Fire trucks couldn't immediately get through.

Those who were walked through the swirling waters in two kayaks, one 9 feet long and the other 15 1/2 feet, included Bradwisch's wife and children, a woman and her newborn, a pregnant woman and an elderly couple.

"The fire just kept spreading because of the wind," he said. "It was like being in front of a flame thrower. The most harrowing part of it was hearing the screams in the dark."

Bradwisch, a former Navy nurse who now works at a federal prison in Brooklyn, said everyone kept calm during the evacuation "because we had kids."

Once at the yacht club, 40 to 50 of them waited out the storm until morning by the light of lanterns, not knowing if they would have homes when they returned.

Buell said one friend who lost her home in the fire has since asked him if he was OK.

"I find that ironic coming from someone who lost her house," he said.

Caring for one another comes naturally in a community that's "been very hard hit over the last decade," he said.

The working-class neighborhood is on a peninsula known as the Rockaways and is home to numerous active and retired members of the city's police and fire departments. In the Sept. 11 attacks, 59 residents of the Rockaways died. Two months after the attacks, American Airlines Flight 587 plunged into a home in Belle Harbor.

At the end of the street last Monday, the fire demolished the Harbor Light Pub, a 32-year-old restaurant owned by a man whose son died at the World Trade Center. The American flag out front and the blue awning and steps it covered were about all that remained of a building just a block from where Flight 587 crashed.

The storm in Belle Harbor still claimed lives. Buell said the neighborhood's longtime postal worker died when he got trapped by water in his basement. And a friend of Buell's was killed when a plate glass window shattered and a shard of glass sliced her, causing her to bleed to death, he said.

He said he last saw her Sunday at a school swim meet for their children.

"She kissed me on the cheek and said: 'Be safe.' It's the last thing she said to me."