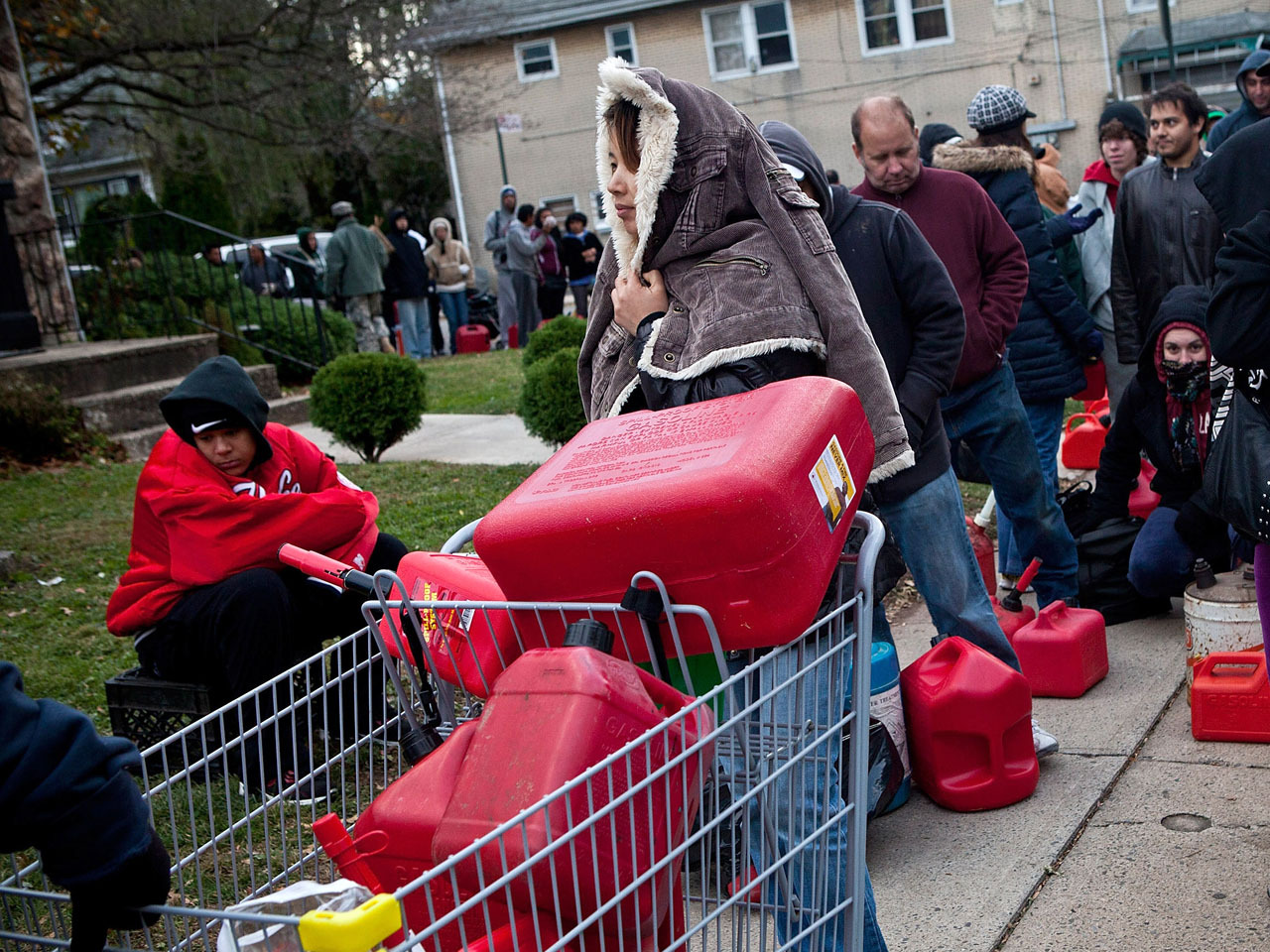 NEW YORK The lights were back on Saturday in lower Manhattan, prompting screams of sweet relief from residents who had been plunged into darkness for nearly five days by Superstorm Sandy. But that joy contrasted with deepening resentment in the city's outer boroughs and suburbs over a continued lack of power and maddening gas shortages.

Adding to the misery of those without power, heat or gasoline were dipping temperatures. Mayor Michael Bloomberg urged older residents without heat to move to shelters and said 25,000 blankets were being distributed across the city.

"We're New Yorkers, and we're going to get through it," the mayor said. "But I don't want anyone to think we're out of the woods."

Bloomberg also said that resolving gas shortages could take days. Lines snaked around gas stations for many blocks all over the stricken region, including northern New Jersey, where Gov. Chris Christie imposed rationing that recalled the worst days of fuel shortages of the 1970s.

Perhaps nowhere was the scene more confused than at a refueling station in Brooklyn, where the National Guard gave out free gas — an effort to alleviate the situation. There, a mass of honking cars, desperate drivers and people on foot, carrying containers from empty bleach bottles to five-gallon Poland Spring water jugs, was just the latest testament to the misery unleashed by Sandy.

"It's chaos; it's pandemonium out here," said Chris Damon, who had been waiting for 3.5 hours at the site and had circled the block five times. "It seems like nobody has any answers."

Added Damon: "I feel like a victim of Hurricane Katrina. I never thought it could happen here in New York, but it's happened."

Damon, 42, had already been displaced to Brooklyn from his home in Queens, where he still lacked power, as did millions outside Manhattan — from Staten Island, the hardest-hit borough, to Westchester County and other suburban areas.

Domingo Isasi, waiting in a gas line on Staten Island, minced no words about the divide he perceived between Manhattan and the outer boroughs.

"The priorities are showing, simply by the fact that Manhattan got their power back," he said, adding that Staten Islanders are used to being lower on the list. "We're the bastard kids who keep getting slapped in the head and told to shut up," he said.

At a gas giveaway station in Queens, the scene was calmer but not happier. More than 400 cars stretched for more than a dozen blocks, with one tanker filling cars one at a time. A police car pulled alongside a car about 250th in line, and officers told the driver they hoped there would still be gas by the time he got there.

The 5,000-gallon trucks from the Defense Department had been dispatched to five locations around the New York City metropolitan area. "Do not panic. I know there is anxiety about fuel," Gov. Andrew Cuomo said.

Hours later, after the long lines formed, state officials said the public should stay away from the refueling stations until emergency responders got their gas. National Guard Col. Richard Goldenberg added, however, that those who were already at the distribution sites would not be turned away.

Ten people were arrested at gas stations on Friday in various disputes over line jumping, police said. The police presence where there were gas lines was increased on Saturday. Still, there was one arrest for disorderly conduct at the armory in Brooklyn, where free gasoline was being distributed.

And fears about crime, especially at night in darkened neighborhoods, persisted. Officers in the Midland Beach section of Staten Island early Saturday saw a man in a Red Cross jacket checking the front doors of unoccupied houses and arrested him for burglary.

Gas rationing went into effect at noon in 12 counties of northern New Jersey, where police enforced rules to allow only motorists with odd-numbered license plates to refuel. Those with even-numbered plates would get their turn Sunday.

Jessica Tisdale, of Totowa, waited in her Mercedes SUV for 40 minutes at a gas station in Jersey City, but didn't quite understand the system and was ordered to pull away because of her even-numbered plate.

"Is it the number or the letter?" she asked around 12:10 p.m. "I don't think it's fair. I've been in the line since before noon. ...There's no clarity." The officer who waved her out of line threw up his hands and shrugged.

At an Exxon station in Wall, N.J., Kathryn Davidson, who had an even-numbered plate, got gas anyway by beating the noon deadline.

"How are people supposed to know?" said Davidson, 53, who said it reminded her of the 1970s, when a similar plan was in place.

President Barack Obama visited the headquarters of the Federal Emergency Management Agency for an update on recovery efforts and said: "There's nothing more important than us getting this right."

He cited the need to restore power; pump out water, particularly from electric substations; ensure that basic needs are addressed; remove debris; and get federal resources in place to help transportation systems come back on line.

New York City and nearby counties hit hard by Sandy have been approved for expanded federal aid for roads, public buildings and parks.

New York officials say the areas initially approved for federal disaster assistance funding have now been approved for additional aid by the Federal Emergency Management Agency. New York City is eligible for the funding along with Nassau and Suffolk counties on Long Island and Westchester and Rockland counties north of the city.

About 900,000 people still didn't have electricity in the New York metropolitan area, including about 550,000 on Long Island, Cuomo said. About 80 percent of New York City's subway service has been restored, he added.

The restoration of power beat the sunrise Saturday in the West Village, though just barely. Electricity arrived at 4:23 a.m., said Adam Greene, owner of Snack Taverna, a popular eatery.

"This morning, I took a really long, hot shower," he said.

Greene said one woman had stopped in Saturday to drop off $10 for the staff, saying she regretted she didn't have enough cash to tip adequately during the blackout.

He joked that 28th Street, above which had power, was like "Checkpoint Charlie."

"You crossed 28th Street and people were living a comfortable life," Greene said. "Down here it was dark and cold."

Throughout the West Village, people were emerging from their hibernation, happy to regain their footing. Stores started to reopen. Signs at a Whole Foods Market promised that fresh meat and poultry and baked goods would return Sunday.

Aida Padilla was thrilled that the power at her large housing authority complex in Chelsea had returned late Friday. "Thank God," said Padilla, 75. "I screamed and I put the lights on. Everybody was screaming. It was better than New Year's."

Asked about whether she had heat, she replied, "Hot and cold water and heat! Thank God, Jesus!"

Some lower Manhattan residents, however, were still without steam heat.

Michael Cornelison, 42, who works in IT, was glad power was back in his downtown apartment. But he said he had taken advantage of the darkness, too.

"It was nice to disconnect this week," Cornelison said. "I slept a lot." He added that he'd watched movies on his laptop, including "Hurricane in the Bayou."

New York City's parks reopened Saturday, and with Sunday's New York City Marathon canceled, many of the runners who had come to town for the race worked out their frustrations with a jog through Central Park, the site of the finish line that won't be used.

Others scrambled to rebook return flights.

Bloomberg reversed himself Friday and yielded to mounting criticism about running the race, which starts on hard-hit Staten Island and wends through all five of the city's boroughs.

In his first comments since canceling the marathon, Bloomberg said he'd fought to keep it going but the controversy was becoming "so divisive" and too much of a distraction.

"I still think that we had the resources to do both, and that we want people to be able to take a break and that sort of thing. ... It's a big part of our economy," Bloomberg told WCBS-TV during a visit to Queens. As he spoke, he was met by catcalls from residents angry about the city's response to the storm.

Many runners understood the decision, especially with the death toll from the storm at 107, including 41 in New York City. The destruction and power outages made many New Yorkers recoil at the idea of police protecting a foot race and evicting storm victims from hotels to make way for runners. More than half of the 40,000 runners were from out of town.

Some runners, though, vowed to never enter New York again. Pia Nielsen, who flew in from Copenhagen, said city and race officials would have to regain her trust.

But Lucy Marquez said she would come back, even as tears filled her eyes at the thought of the three young children she left at home in Mexico to run in her first marathon — a race her father competed in 12 years ago.

"Shock. Denial. Rage," she said. "I love New York City. This is the marathon I want to run."