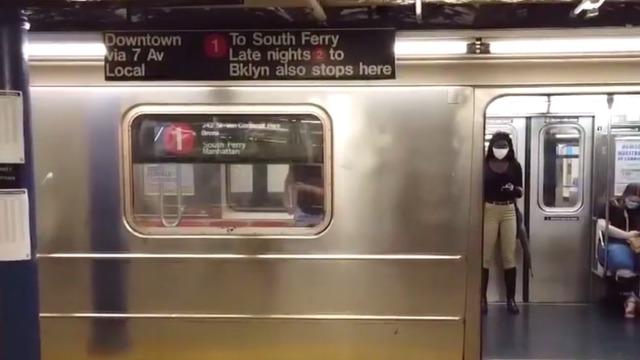 New York City was once the epicenter of the coronavirus outbreak in the U.S. This morning, after nearly three months of being shut down, the city is beginning phase one of its reopening.

As states reopen across the country, 17 have reported an increase in average daily new COVID-19 cases, compared with two weeks ago – and that is raising concerns among some health experts.

In New York, phase one means construction projects can restart; manufacturers can get their floors open again; and non-essential retailers can start curbside pickup. It might seem small, but it's a huge step forward for a city that's been locked down for more than 80 days.

Officials estimate 400,000 New Yorkers will return to work today 80 days after the city went on lockdown. "Every New Yorker should celebrate as our achievement together, your achievement, because you did the hard work to fight back the coronavirus," said Mayor Bill de Blasio.

it feels like New York finally got invited to the party."

"It's so personal when it's a small store and I really feel connected to my customers. And I just feel like I haven't seen them in so long," said Stephanie Goldstein, who owns the kids clothing store Stoopher & Boots. She says while they were closed, her online business really took off.

Begnaud asked, "How much do you pay in rent a month for the store?"

"Has this made you think about, maybe I should do this online, 'cause I've done pretty well online?"

The next phase of reopening could be just weeks away. But after months of hard-won progress against the coronavirus, there are concerns that the massive demonstrations in the wake of George Floyd's death could have given the virus a chance to spread again.

To date, more than 200,000 New York City residents have tested positive for the virus. The death toll in the city is estimated to be just over 21,000.

"We've tested everything else, we've measured everything else," said Gov. Andrew Cuomo. "Everything was going fine, then we had these large number of protests. We don't know what the effect of those protests are. And we're concerned about it."

And that concern isn't specific to New York City. Massive crowds flooded the streets of Washington, D.C. on Sunday; tens of thousands have marched there over the last 10 days. About a week before those protests started, Dr. Deborah Birx of the White House coronavirus task force said, "The number one Metro [area] with the highest positivity rate is the District of Columbia."

Dr. Birx also called attention to the rates of positive cases in Chicago, where tens of thousands of people protested over the weekend.

And she warned that cases were still rising in Minneapolis. Since George Floyd was killed there on May 25, that city has been the site of some of the largest memorials and demonstrations around the country.

"Well, look, we're certainly going to see transmission coming out of these gatherings, there's no question about that," said former FDA Commissioner Scott Gottlieb. On Sunday he told "Face the Nation" moderator Margaret Brennan that people who attended protests in any U.S. city should maintain social distancing and take extra precautions, like avoiding the elderly.

"These are occurring in hot spots," Gottlieb said. "We're likely to see cases go up. I think trying to tease out what the contribution is from the protests versus the contribution just of the general reopening is going to be hard."

In New York City, there are 15 testing sites set up just for people who went to those demonstrations. Gov. Cuomo said he wants to test 35,000 people in the city each day as the re-opening gets underway.