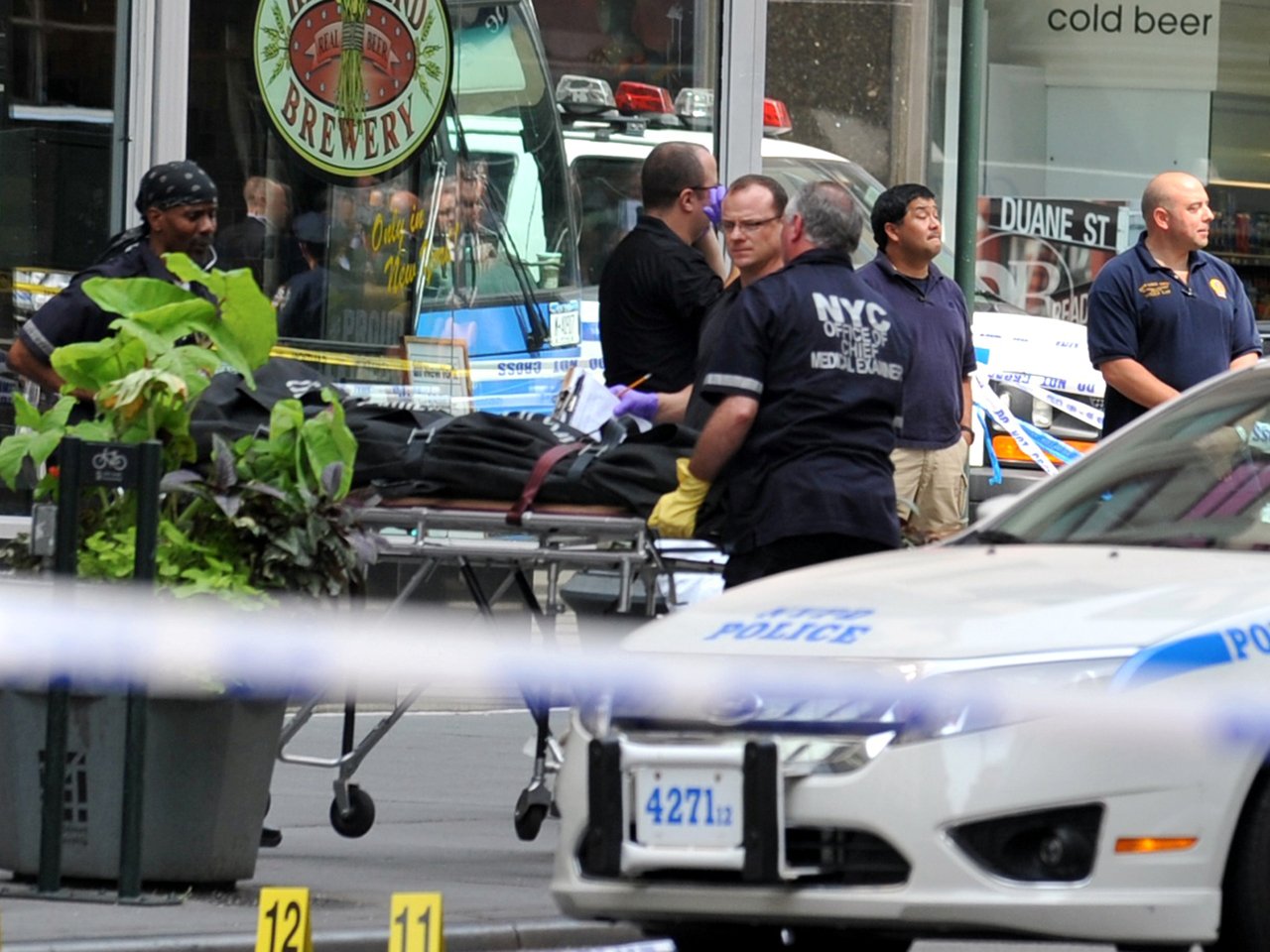 (CBS/AP) NEW YORK - Police say a Jeffrey Johnson, a laid-off worker who fatally shot a vice president from his former company outside the Empire State Building on Friday, purchased the weapon legally in Florida in 1991.

Johnson legally bought the .45 caliber pistol in Sarasota, Fla., but he didn't have a required permit to possess the weapon in New York City, police said.

Wearing a suit and tie and carrying a briefcase, Johnson walked up to the vice president of Hazan Imports, Steven Ercolino, 41, put a gun to his head and fired three times without saying a word, according to authorities and witnesses.

"Jeffrey just came from behind two cars, pulled out his gun, put it up to Steve's head and shot him," said Carol Timan, whose daughter, Irene, was walking to work with Ercolino.

Johnson, 58, and Ercolino had traded accusations of harassment when Johnson worked there, Police Commissioner Raymond Kelly said; law enforcement officials said that Johnson had been angry that Ercolino wasn't promoting his products.

"New York City, as you know, is the safest big city in the country, and we are on pace to have a record low number of murders this year," Mayor Michael Bloomberg said at a press conference Friday. "But we are not immune to the national problem of gun violence," he said about the shooting, which comes in the wake of mass shootings inside a Colorado movie theater and a Sikh temple in Wisconsin.

Witness accounts detail the chaotic showdown that resulted in officers killing Johnson. At least nine others were wounded during the attack, some by stray police gunfire, authorities said.

Gunshots rang out on the Fifth Avenue side of the famed Manhattan building at around 9 a.m., when pedestrians on their way to work packed sidewalks and merchants were opening their shops.

"People were yelling 'Get down! Get down!'" said Marc Engel, an accountant who was on a bus in the area when he heard the shots. "It took about 15 seconds, a lot of pop, pop, pop, pop, one shot after the other."

A construction worker who saw the shooting followed Johnson and alerted two police officers. There were conflicting accounts about whether Johnson fired at the police officers or just pointed the gun at them.

Johnson's semi-automatic weapon was equipped to fire at least eight rounds; at least one round was left in the clip, police said. Another loaded magazine was in his briefcase.

Robert Asika, who was shot in the right arm, said he was "100 percent positive" that a police officer had shot him. He also said he saw Johnson fire his gun at the officers.

The wounded victims were five women and four men, aged 20 to 56, authorities said. All were from New York City, except a 35-year-old woman from Chapel Hill, N.C. They suffered graze wounds or other minor injuries.

Ercolino's profile on the business networking site LinkedIn identified him as a vice president of sales at Hazan Import. It said he was a graduate of the State University of New York at Oneonta.

Hazan Import Corp. imports women's clothing and accessories, according to public records. The business was incorporated in 1975 and lists Ralph Hazan, 61, Leon Hazan,35, and Isaac Hazan. 92, as presidents. Calls to the executives weren't immediately returned

Johnson worked at the company near the building for about six years and was laid off about  year ago because of downsizing, Kelly said.

Even after he was laid off, Johnson would leave left his Upper East Side apartment building each morning in a suit, and often returned about a half hour later after going to get breakfast at McDonald's, his neighbors said.

"He was always alone," said Gisela Casella, who lived a few floors above him. "I always felt bad. I said 'Doesn't he have a girlfriend?' I never saw him with anybody."

His superintendent, Guillermo Suarez, said he lived alone in a one-bedroom apartment that he was subletting from someone else. He called him a "very likable guy," who always wore a suit.

All of the civilians wounded by stray bullets are expected to survive, and O'Donnell says that means the NYPD will likely be under less scrutiny for its actions than it would have had more people been killed.