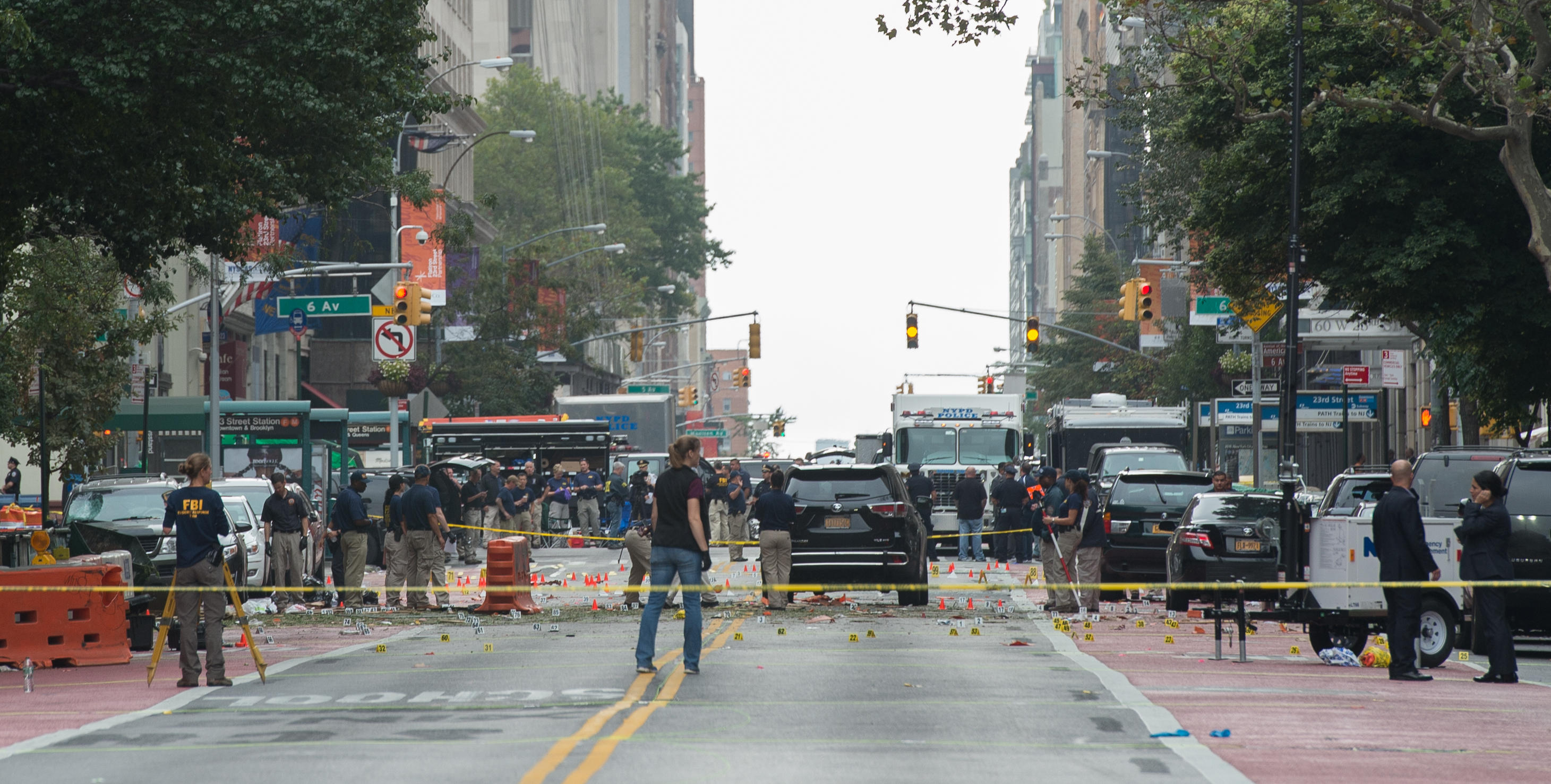 NEW YORK - New York City Mayor Bill de Blasio said Sunday that residents of the city would see an expanded presence of police as officials investigate a bombing in Chelsea that injured 29, while guarding the United Nations General Assembly, which draws leaders from around the world to New York each year.

“You will see a very substantial NYPD presence this week, bigger than ever,” de Blasio said during a press conference just after noon Sunday.

De Blasio said all 29 victims of the explosion, which rocked a crowded and popular Manhattan neighborhood, have been released from area hospitals. Another possibly-explosive device discovered blocks away was safely removed early Sunday.

Sources told CBS New York Sunday evening that the FBI made a car stop on the Belt Parkway near the Verrzano Bridge. There are several people in custody. It’s unknown the reasons for the car stop or whether its in regards to Chelsea.

The FBI said in a statement that at 8:45 p.m., the FBI and NYPD conducted a traffic stop of a vehicle of interest in the investigation into Saturday’s bombing in Manhattan. No one has been charged with any crime. The investigation is continuing.

Officials said there’s no evidence currently linking the explosion to terrorism, and said the incident appeared to be unrelated to a pipe bomb explosion earlier Saturday in Seaside Park, New Jersey near the start line of a charity run.

At a press conference earlier on Sunday morning, New York Governor Andrew Cuomo said he had spoken with New Jersey Governor Chris Christie, and so far the explosives did not appear to be similar.

Atlhough Cuomo on Sunday referred to the explosion as an act of “terrorism,” NYPD, FBI and other NYC officials were hesitant to use the phrase until a suspect or motive could be established.

In an appearance on CBS’ “Face the Nation,” Rep. Peter King, R- N.Y.,  said it could still well turnout to be a terrorist act.

“We had the Times Square bombing back in New York in 2011,” King said. “It took several days before we realized that that was coming out of the Taliban and Pakistan.”

Roselyn Olivares, who lives on 23rd Street between Sixth and Seventh avenues, said the blast did damage to her fourth floor apartment.

During the U.N. General Assembly, New York typically increases police presence, but officials said Sunday law enforcement would be on particularly high alert in the city this week, as a result of the explosion.

Cuomo said 1,000 additional law enforcement officers were being deployed after the Saturday night blast in Chelsea, a primarily residential neighborhood on Manhattan’s west side that’s known for its art galleries and large gay population.

Stephane Dujarric, Spokesman for the U.N. Secretary General, told CBS News’ Pamela Falk that more than 14,000 passes have been issued for dignitaries, their aides, and additional press for the U.N. General Assembly this year.

“Security inside the United Nations is being assessed on a constant basis. Outside of the UN, security is the responsibility of the host country. We receive great cooperation and appreciate the support from the federal authorities and the NYPD throughout the year, and especially during the General Assembly to keep staff, delegates and visitors safe,” Dujarric said.

It was unclear who was behind the blasts in New York and New Jersey, and what motivated them. A law enforcement source tells CBS News senior investigative producer Pat Milton that while no suspect nor motive has been established, terrorism has not definitively been ruled out as a possibility.

The second device that officers investigated four blocks from the Chelsea scene was a pressure cooker with a cellphone and wires attached, and was found in a plastic bag. The device was removed with a robot and taken to a department firing range in the Bronx.

An NYPD official tells CBS News they were successfully able to pull the device apart. They did not have to blow it up.

Two law enforcement sources tell CBS News the device that exploded appears to also have been a pressure cooker bomb. One source said officials believe it was set off with a cellphone signal.

Authorities have one person on surveillance video seen planting at least one of bombs in Manhattan, CBS News learned Sunday night. This individual has not been identified. Authorities stress that he may or may not be the person who did this, but it is a solid lead.

A source tells CBS News that they have not yet definitively made the connection between the blast in Chelsea, and the blast in Seaside. However, the source says both the Chelsea bombs and the Seaside Park bombs use cellphones as triggers.

The New York Times reports the second device appeared to be similar to the devices used in the Boston Marathon bombing.

Homemade pressure cooker bombs were used in the Boston Marathon attacks in 2013 that killed three people and injured more than 260.

The explosion that rocked a bustling Chelsea neighborhood appeared to have come from a construction toolbox in front of a building. Photos from the scene show a twisted and crumpled black metal box.

“This is a very dense area, the whole block is restaurants and residences and this area on a warm Saturday night is an area swarming with people,” New York City Councilman Cory Johnson told CBS New York.

The blast happened on West 23rd Street, in front of a residence for the blind, near a major thoroughfare with many restaurants and a Trader Joe’s supermarket. Witnesses said the explosion at about 8:30 p.m. blew out the windows of businesses and scattered debris in the area. Officials said no evacuations were necessary.

On Sunday, a team of five FBI agents searched an Uber driver’s vehicle that had been damaged in the Manhattan blast, ripping off the door panels inside as they examined it for evidence.

The driver, MD Alam, of Brooklyn, had just picked up three passengers and was driving along 23rd Street when the explosion occurred, shattering the car’s windows and leaving gaping holes in the rear passenger-side door.

“It was so loud,” the 32-year-old Alam said. “I was so scared. There was a loud boom and then smoke and I just drove away.”

Alam said he hit the gas and tried to take his passengers to their destination in Queens, but pulled over along Madison Avenue and 39th Street. He went to a local police precinct to file a report for his insurance company and police contacted the FBI.

New York City subway routes were affected by the explosion, which rattled some New Yorkers and visitors on the heels of the 15th anniversary of the 9/11 terror attacks. Cuomo said mass transit in the area would resume as early as Monday.

In Los Angeles, Police Chief Charlie Beck asked Emmys attendees to remain vigilant in the wake of explosions in New York City and New Jersey.  Beck said there were no known credible threats to security in Los Angeles, but those attending Sunday’s Emmys in downtown Los Angeles were asked to report any suspicious activity.