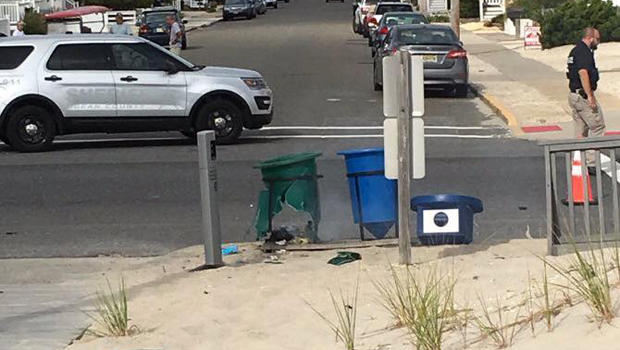 SEASIDE PARK, N.J. -- An explosive device detonated in a Jersey Shore town Saturday shortly before thousands of runners were due to participate in a charity 5K race to benefit Marines and sailors, authorities said.

An official with law enforcement told CBS News the device consisted of three small pipes somehow tethered together and possibly wired. All pipes apparently had explosives, though only one detonated.

No injuries were reported in the blast in Seaside Park around 9:30 a.m. Saturday, said Al Della Fave, spokesman for the Ocean County Prosecutor’s Office. He also said no surrounding structures suffered any apparent damage.

Numerous state and federal law enforcement agencies are investigating. The FBI was leading the investigation, CBS News has learned.

Later Saturday, there was an explosion in New York City’s Chelsea neighborhood, which left 25 people with minor injuries. There is no word is whether the incidents are related.

The third annual Semper Five run was canceled, and the immediate area was put on lockdown.

The device was in a plastic garbage can when it exploded, Della Fave said. Authorities immediately cleared the boardwalk and beach area, and bomb-sniffing dogs were used to search the area.

“We did find that within that same garbage can there were other devices wired to the one that did explode,” Della Fave told CBSN.

No suspects have been arrested, the state police said.

Della Fave said if not for the delay, “there could have been great harm.”

Some homes near the scene were evacuated as a precaution, and the public was being urged to avoid the area.

The group that organized the event thanked Seaside Park police and the other emergency responders “for their quick action” following the blast. It wasn’t immediately clear if the charity race will be rescheduled.

Several racers and people who said they were at the event took to social media to praise the way race officials and law enforcement handled the situation. They said officials kept them informed about what was happening and helped keep people calm.