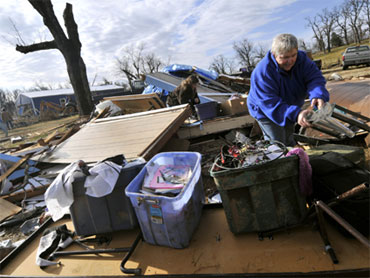 Shaken residents spent New Year's Day sifting through the wreckage wrought by tornadoes that touched down in several states in the final hours of 2010, killing seven people in two states and injuring dozens of others.

Six of the victims - three in Missouri and three in Arkansas - died Friday as tornadoes fueled by unusually warm air pummeled the South and Midwest. A seventh victim who was injured Friday near the south-central Missouri town of Rolla died Saturday at a hospital in Columbia, said Bruce Southard, the chief of the Rolla Rural Fire Department.

The woman, whose name wasn't immediately released, was entertaining a friend, Alice Cox, 69, of Belle, Mo., in her trailer when the twister hit.

Southard said nothing was left of the trailer except for the frame and that the twister scattered debris 40 to 50 yards from where the trailer had sat. The women were found under a pile of debris, Southard said.

"It's like you set a bomb off in it," Southard said in a phone interview. "It just annihilated it."

At a farm not far away, 21-year-old Megan Ross and her 64-year-old grandmother Loretta Anderson died when a tornado hit where their family lived among three mobile homes and two frame houses in Lecoma, Dent County Emergency Management Coordinator Brad Nash said.

The National Weather Service determined the home was hit by a weak tornado that was 50 yards wide and traveled less than a mile.

Nixon started the tours around 11 a.m. in the St. Louis County town of Sunset Hills, where violent storms hit after noon Friday and left a trail of debris. Nixon was headed to Rolla later in the day.

In the northwestern Arkansas hamlet of Cincinnati three people died when a tornado touched down just before sunrise Friday. Gerald Wilson, 88, and his wife, Mamie, 78, died in their home, and Dick Murray, 78, died after being caught by the storm while milking cows, Washington County Sheriff Tim Helder said.

The Cincinnati tornado plucked Chris Sisemore from his rural home and flung him across the street. Sisemore had bumps and bruises but no serious injuries.

"It sucked me out of my house and carried me across the road and dropped me," he said. "I was Superman for a while. ... You're just free-floating through the air. Trees are knocking you and smacking you down."

At Fort Leonard Wood, a tornado with winds of 136 to 165 mph demolished about a dozen homes and caused lesser damage to many more in a neighborhood that houses military officers.

Spokesman Jeff S. Maddy said many from the army base were traveling for the holidays.

"The good thing here is if you had to have a storm like this, it couldn't happen at better time because we have the holiday season and so many people are visiting family and friends away from Fort Leonard Wood."

In Mississippi at least three people were hurt and extensive structural damage after storms tore through the state Friday afternoon. On early Saturday two more were injured in central Mississippi and several homes were damaged by a storm in Attala County.

Ed Agre of the National Weather Service says winds hit 60 mph at the service's office at the Jackson airport, where about 200 people had to be evacuated Friday.

The storms knocked down trees and power lines. About 6 inches of rain fell in places, leading to flash flooding.

Tornado watches were in effect for parts of Mississippi, Alabama and Louisiana on Saturday morning as the system continued moving east.

In Illinois, a tornado may have touched down in Petersburg, northwest of Springfield, where about two dozen homes were damaged - some severely - and a woman was injured when her car was struck by a falling tree branch. Her injuries weren't believed to be life-threatening.

"This storm system has been showing significant signs that it could develop," said Chris Buonanno, a meteorologist at the National Weather Service in North Little Rock.

While the spring brings most of the region's tornadoes, violent weather at this time of year isn't unheard of. A February 2008 outbreak killed 31 in Tennessee and 14 in Arkansas, and in January 1999 two separate outbreaks across the South killed 18, including seven in Arkansas.

Buonanno said there appears to be some association between changes in South Pacific Ocean temperatures and changes in the flow of the jet stream in the central part of the United States, causing an uptick in violent weather.

Friday's tornado fatalities were the first in the nation since Sept. 16, when a woman hit a falling tree while driving in Queens, New York, and a man was killed in his home at Belleville, West Virginia. The deaths push this year's count to 42 nationally, and to 5 in Arkansas. The deaths in Missouri were its first of the year.