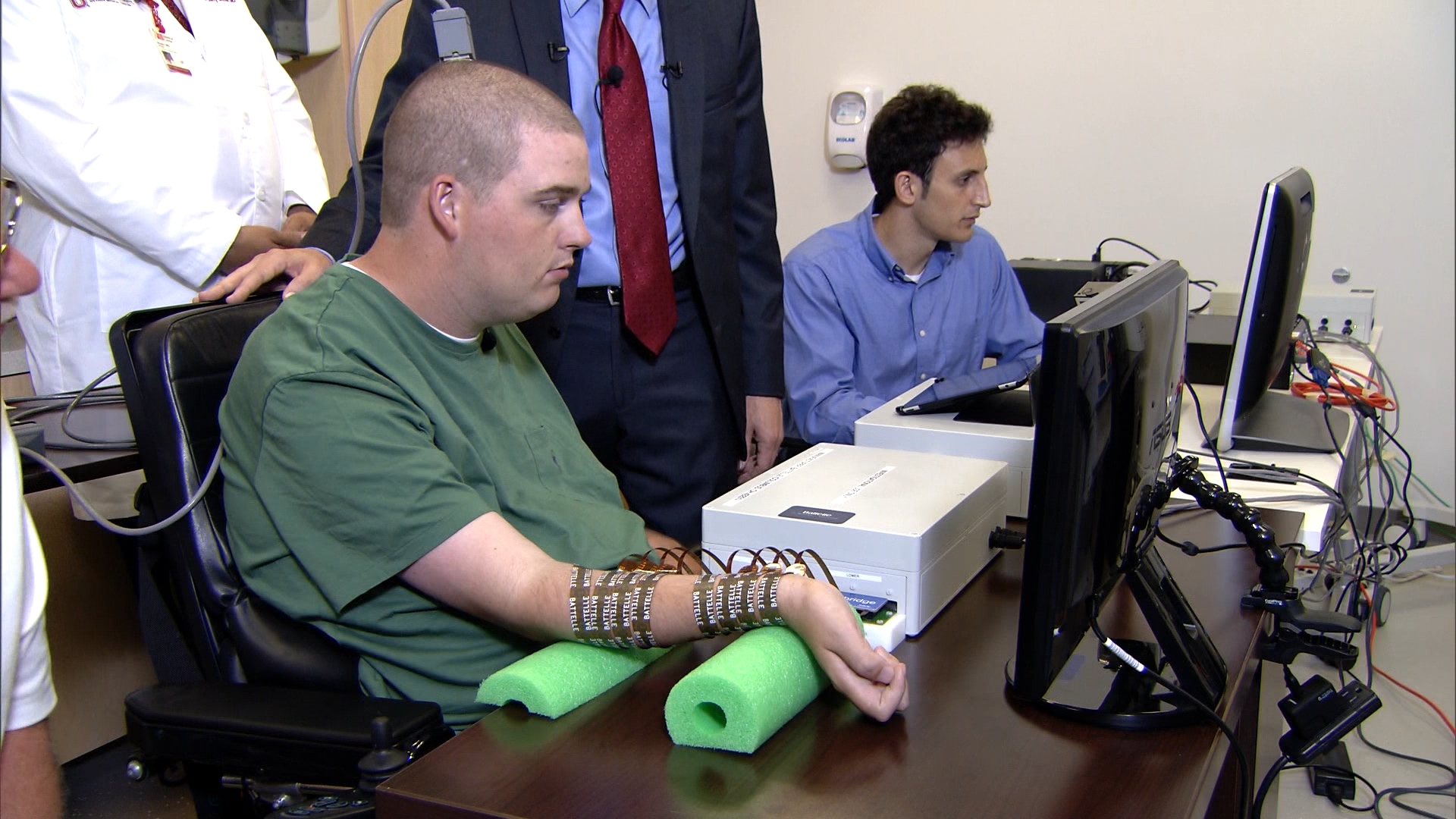 A young quadriplegic man is clearing a major milestone in his quest to return to a normal life.

CBS News' Dean Reynolds says four years ago, Ian Burkhart was a 19-year-old lacrosse-player with a bright future. Then he went on vacation, had a freak swimming accident and was paralyzed from the chest down.

When he arrived last week at the Ohio State University Wexner Medical Center, he had the highest hopes that a new medical experiment might change his fate, and the fate of others.

Burkhart had brain surgery two and a half months ago -- the first patient in an unprecedented medical trial involving surgeons from Ohio State and engineers from Battelle, a non-profit research center, who have created a technology called Neurobridge.

"The technology is gonna take brain activity from a tiny chip we've implanted in his brain and translate that activity to a message that muscles can understand, and then send those signals to the muscles and he's gonna be able to open and close his hand," explained Battelle engineer Chad Bouton.

The microchip is connected to a port screwed onto Burkhart's skull. The port is cabled to a computer, which is designed to decode messages from his brain and then beam commands to a sleeve laden with electrodes around his forearm.

Nobody was sure if the signal from Burkhart's brain would be strong and clear enough to reach his hand and make it move. They only had to wait a tenth of a second for their answer.

While it looks like such a small thing -- extending your fingers or clasping a spoon -- no human in Burkhart's condition had ever done it the way he did.

"Today was great," Burkhart said. "I mean, to be able to open and close my hand and do those complex movements that I haven't been able to do for four years was great. Physically, it was a foreign feeling. Emotionally it was definitely a sense of hope and excitement to know that it's possible."

Dr. Ali Rezai, Burkhart's surgeon, has high hopes for other patients in the same condition.

"I do believe there will be a day coming soon when somebody who's got a disability -- being a quadriplegic or somebody with a stroke, somebody with any kind of brain injury -- can use the power of their mind and by thinking, be able to move their arms or legs," said Rezai.

Burkhart is just happy to make that first move.

"If you have the right mindset, that can carry you a long way," he told CBS News.

The "CBS This Morning" crew, along with co-hosts Charlie Rose and Norah O'Donnell, surprise Gayle King with a birthday treat