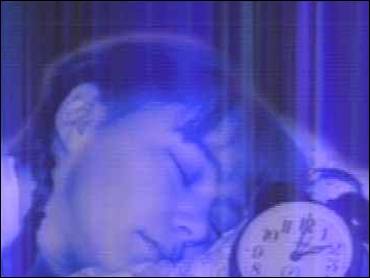 The FDA has approved a new, longer-lasting sleeping pill.

The new pill is Lunesta, formerly known as Estorra. Sepracor, Inc. manufactures it. Like the currently approved drugs Ambien and Sonata, Lunesta is a new-generation sleep drug that isn't addictive and doesn't require larger and larger doses during long-term use.

Clinical trials show that Lunesta helps people get to sleep faster. But its greatest virtue may be that it helps people sleep through the night. That's a particular problem for elderly patients suffering from insomnia.

Ambien and the shorter-acting Sonata have revolutionized the treatment of insomnia, says Martin B. Scharf, PhD, director of the Center for Research in Sleep Disorders in Cincinnati, and a psychiatry professor at Wright State University School of Medicine in Dayton, Ohio.

"Our thinking about insomnia medications is a completely different animal from what it was in the past. Before Ambien, all of us were in the dark ages," Scharf told WebMD in a March 2004 interview. "We were reluctant to treat pain because of these problems with the drugs that we had. What we are appreciating with these new compounds ... is that they can be taken over the long term. There is no evidence of dependence or need for dose escalation with these newer medications. It makes more sense to get a good night's sleep than to worry about these side effects."

Timothy A. Roehrs, PhD, director of research at the Sleep Disorders and Research Center at Henry Ford Hospital in Detroit, says one major goal for sleeping pills is to have an effect that lasts for a person's normal sleep time and then wears off quickly.

"Ambien does do that. It is the most popular current drug," Roehrs told WebMD in a March 2004 interview. "[Lunesta] has about a six-hour half life, so it is more likely to maintain sleep. If, specifically, sleep maintenance is your problem, this might work better than Ambien."

About a year behind Lunesta in the approval pipeline is indiplon, the yet-to-be-brand-named sleeping pill from Neurocrine Biosciences in partnership with drug giant Pfizer. Pfizer is a WebMD sponsor.

Indiplon is a short-acting sleeping pill — but it's being developed in two formulations: One is meant for use at nearly any time of the night, to help a person get to sleep quickly; the other has both an immediate-release and delayed-release component, intended to last throughout the night.

"When you have a compound with just one peak, you get the majority of the sleep effect at the front end whether you need it or not," Scharf says. "[Indiplon] works both at front end — falling asleep — and later, to help people stay asleep. Then it wears off before they wake."

Two other sleeping pills are in late-stage clinical trials. They include TAK-375 from Takeda, a Japanese firm, and gaboxadol from the Danish firm H. Lundbeck in partnership with Merck. According to a report in TheStreet.com, TAK-375 may arrive in the U.S. in 2006, followed by gaboxadol in 2008.

"To the person who hasn't previously taken sleeping pills, the good news is the drugs are becoming more specific and more easily tailored to the individual patient's specific need," Roehrs says. "And the news for the patient who already is taking a drug, but has some undesired side effects or something that they might rather not experience, [is that] that individual could explore with their doctor some of these newer alternatives."