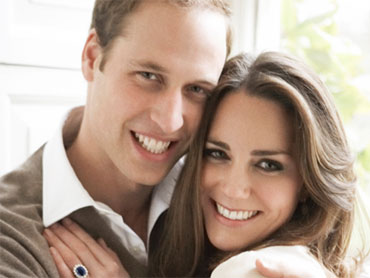 The official engagement photos of Prince William and Kate Middleton are out, and are already held up against each other, and those of the prince's parents, the late Princess Diana and Prince Charles.

The new photos were taken by acclaimed photographer Mario Testino, who took the pictures of Princess Diana that graced the cover of Vanity Fair in 1997 - images William and his brother, Prince Harry, apparently told Princess Diana were the ones that most accurately captured her true personae.

One of the new photos is formal, the other much less so.

On "The Early Show" Monday, co-anchor Harry Smith observed that, "People are just gushing over these pictures of William and Katherine, and they look better than a royal couple. They look like a couple in love."
"They certainly do," agreed veteran royals-watcher and Majesty magazine Editor Ingrid Seward, "especially the picture I call 'the cuddle' (the less formal one). I think that is a beautiful picture. I think the other one, the more formal one, is possibly a little dull. But then, they need that, because that's the picture that they use, you know, signed to give to people, so it can't be too, too cuddly, too lovey-dovey."

Smith said he's struck by "the difference between these engagement photographs and the photographs of William's parents from those many years ago that were just so frozen cold."

"Yeah, well, remember, Diana was only 19 when those photographs were taken," Seward responded, "and she was very, very nervous, very shy, and she hated what she was wearing. So she felt very self-conscious. And, you know, Charles was sort of stick-in-the-mud, which he, you know, that's the image that he still has. So they were very different."

To see the rest of the interview, click on the video below: