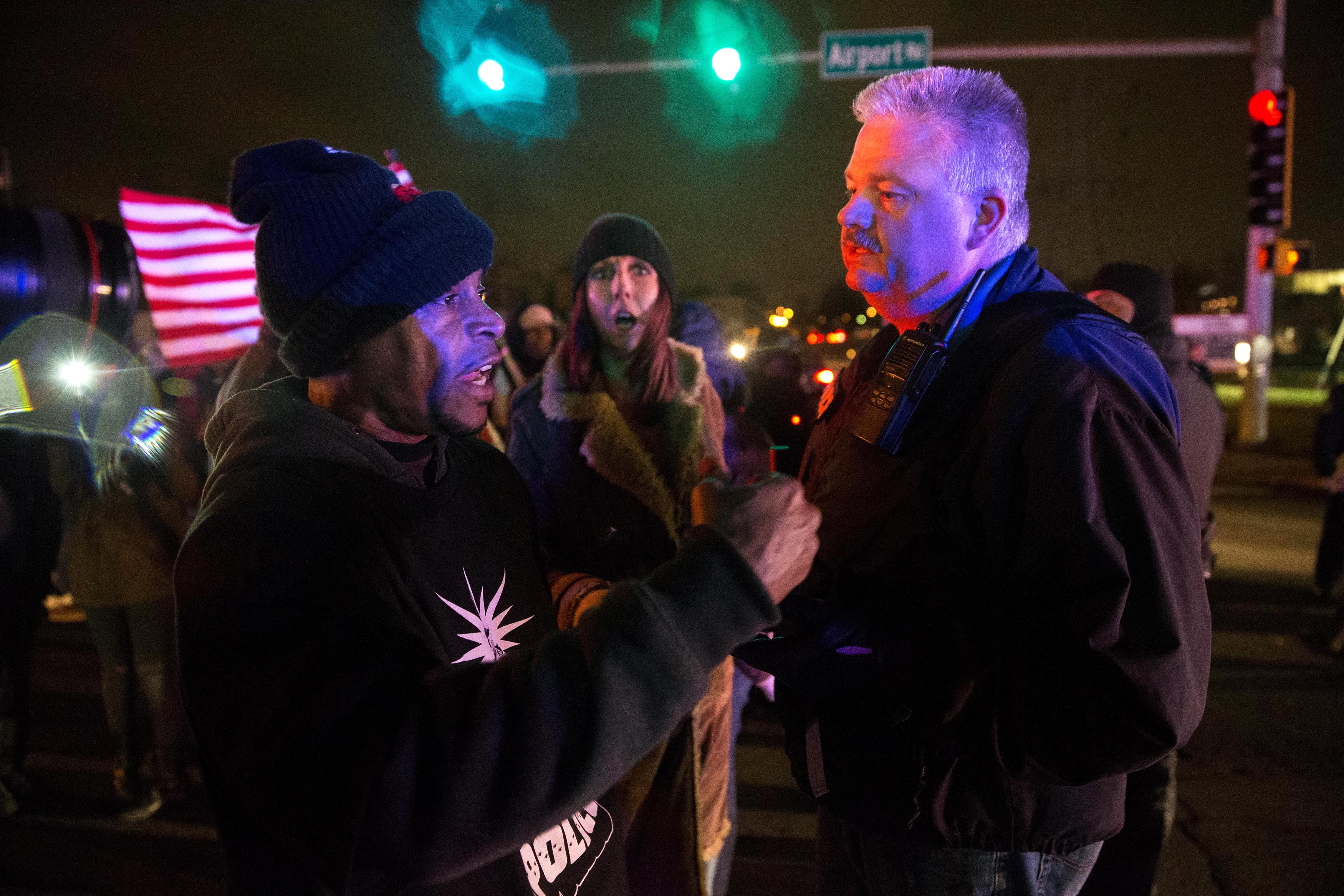 BERKELEY, Mo. -- Protesters took to the streets of a St. Louis suburb on Wednesday night, one night after the fatal shooting of an 18-year-old black man by a white police officer.

Authorities said Antonio Martin was shot and killed late Tuesday after pointing a 9 mm handgun at the officer who was questioning him and another man about a theft at a convenience store.

Martin died at the scene, though Belmar declined to specify where the fatal bullet hit Martin. The store's surveillance cameras captured the confrontation from several angles.

Although the shooting took place only two miles from Ferguson, where a white police officer shot and killed 18-year-old Michael Brown, officials said the circumstances were starkly different.

"You couldn't even compare this with Ferguson or the Garner case in New York," Berkeley Mayor Theodore Hoskins said, referring to the chokehold death of Eric Garner, another black man killed by a white police officer.

The mayor said the video footage appears to support the officer's claim that he fired in self-defense.

Hoskins, who is black, also noted that unlike in Ferguson -- where a mostly white police force serves a mostly black community -- more than half of the officers in his city of 9,000 are black, including top command staff.

Shortly after the shooting, a crowd of about 300 people gathered at the gas station, throwing rocks and bricks in a scene reminiscent of the sometimes-violent protests that followed Brown's death.

Belmar said three explosive devices, perhaps fireworks, were tossed near gas pumps, and some protesters threw rocks and bricks. One officer hit by a brick was treated for facial cuts, and another was treated for a leg injury sustained as he retreated from an explosive.

Wednesday night, a smaller group of protesters marched down Interstate 170 before staging a "die-in" outside the convenience store amid a strong police presence.

Martin was sentenced to 30 days in jail after pleading guilty to a theft charge in November 2013, according to the St. Louis Metropolitan Police Department. He had been expelled from Jennings High School.

The 34-year-old officer, a six-year veteran of the Berkeley Police Department whose name has not been released, is on administrative leave while St. Louis County police and the city of Berkeley conduct separate investigations.

Belmar called the shooting a tragedy for both Martin's family and the officer.

Belmar said the officer wasn't wearing his body camera and the dashboard camera was not activated because the patrol car's emergency lights were not on.

"We're in the process of trying to implement that. We only have three," Hoskins said. "If it had been six months from today, and we've gone through all of the training, I would have some concern."

In fact, Hoskins said at that point, it will bring about "severe penalties."

Martin's death was the third fatal shooting of a young black man by a white police officer in the St. Louis area since Brown was killed by Ferguson officer Darren Wilson on Aug. 9.

Michigan officer charged with murder in death of Patrick Lyoya
More
Thanks for reading CBS NEWS.
Create your free account or log in
for more features.
View CBS News In
CBS News App Open
Chrome Safari Continue
Be the first to know
Get browser notifications for breaking news, live events, and exclusive reporting.