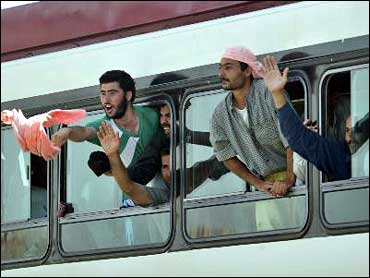 The U.S. military on Friday released a group of prisoners from the Abu Ghraib jail, as new pictures and disturbing details of the mistreatment of detainees there emerged.

The military periodically frees prisoners from Abu Ghraib, which was also notorious as the site of executions and torture during Saddam Hussein's regime. The military is still sending detainees who are considered security risks to Abu Ghraib.

More details of prisoner abuse emerged Thursday night with the release of more photos of abuse and previously secret statements of prisoners by The Washington Post on its Web site.

In that secret testimony, prisoners said they were ridden like animals at the prison, fondled by female soldiers and forced to retrieve their food from toilets.

The Post reported it has obtained hundreds more pictures and several

digital videos
of the abuse. In one photo, a cornered inmate is cowering as a soldier tries to restrain a large black dog with both hands. In another photo, a naked prisoner covered with a brown substance is ordered to walk in a straight line with his ankles cuffed.

According to the Post, some of the detainees say they were abused as punishment for fighting. Soldiers forced some detainees to denounce Islam, the testimony claims.

"They ordered me to thank Jesus that I'm alive," Ameen Saeed Al-Sheik told investigators. He clams the soldier asked him if he believed in anything, to which he replied, "I believe in Allah."

Al-Sheik claims the soldier replied, "But I believe in torture and I will torture you."

Some were force-fed pork and liquor, forced to bark like dogs. One said he was allowed only to wear women's underwear. Others told of witnessing sexual assaults, one involving a lightstick.

Despite being interviewed separately, the Post said, much of the detainees' testimony describes a similar pattern of abuse.

Brig. Gen. Janis Karpinski, who headed the military police unit at the Abu Ghraib jail, told the CBS News Early Show that the areas of the prison where the abuses occurred were "not under my control for several months," with military intelligence officers effectively running them.

Karpinski, who was cited by an Army investigator for failing oversee her guards properly, claimed her soldiers "were given orders by people not in a capacity to give orders."

Some of the soldiers accused of crimes in the abuse have blamed military intelligence for ordering the abuse.

The New York Times reports some of the intelligence officers working at Abu Ghraib served in Afghanistan first and imported harsh interrogation techniques to the Iraqi prison. The Times also reports that in 2001 and 2002, the White House, Vice President Dick Cheney's office and the Pentagon signed off on secret Justice Department memos outlining ways U.S. officials could avoid war crimes charges over interrogations of prisoners.

Some of the techniques were used until military lawyers objected on grounds they went too far, reports CBS News Correspondent David Martin.

Asked if she had seen abuses violating the Geneva Convention at the prison she ran, Karpinski told the Early Show, "Absolutely not. Absolutely not."

"I certainty bear the responsibility for the behavior of those soldiers," she said. "I think we have to sort out who was giving them instructions and why. They didn't report some of those things through their chain of command and ultimately to me."

On Thursday, Defense Secretary Donald Rumsfeld lamented that the multiple investigations were diverting attention from operations in Iraq and Afghanistan.

"An awful lot of us are spending an enormous amount of time on the subject," Rumsfeld told reporters after a private Capitol Hill briefing on Iraq for all senators. He hastened to add, however, that "the situation needed to be addressed" and that criminal inquiries were the proper method.

Also Thursday, officials confirmed that the newly unearthed photos from Abu Ghraib show the body of a detainee whose death is the subject of a Justice Department inquiry. At least three such cases have been referred to the Justice Department, the official said.

FBI director Robert Mueller said Thursday that FBI agents who interviewed detainees at the Abu Ghraib prison in Iraq did not witness any abuse or take part in any mistreatment. However, Mueller said that "upon occasion" agents have raised objections about the way certain interrogations overseas are handled.