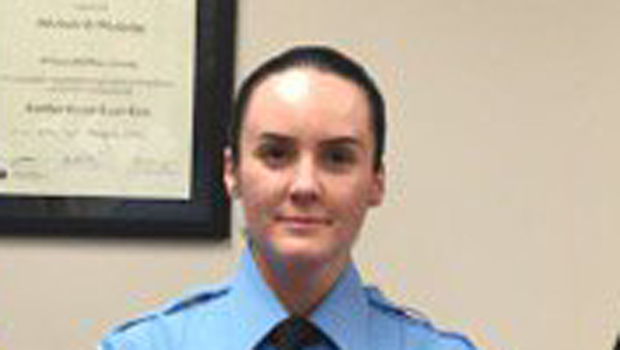 WOODBRIDGE, Va. -- A Virginia police officer was shot and killed during her first weekend on the job, CBS affiliate WUSA in Washington reported.

The Prince William County Police Department announced Saturday night that officer Ashley Guindon, one of three officers shot responding to a domestic related incident earlier in the evening in Woodbridge, Virginia, had died.

Guindon was sworn in to the department on Friday and began her first shift this weekend, according to the police department's Twitter feed.

Guindon had been a county police officer a few years ago and had left and returned to the force, Corey Stewart, chairman of the Prince William County Board of Supervisors, said in a phone interview with The Associated Press Saturday night. He did not know the exact dates of when she started and left, he said.

A police statement posted to Facebook said the other two officers wounded during the encounter were being treated for their injuries. Their conditions were not made public.

"We ask for everyone's thoughts and prayers as our department deals with this tragic loss," the police statement said.

Officer Nathan Probus told CBS News the officers were fired upon around 5:30 p.m. when they arrived at a home in Woodbridge, about 20 miles southwest of Alexandria, after a call about an argument.

A suspect, who was not injured in the shooting, was arrested, Probus said. Neighbors told WUSA the suspect's wife was also shot, but her condition was not known.

Guindon is the tenth law enforcement officer in the U.S. to die this month, according to the Officer Down Memorial Page website. All but one was killed by gunfire.