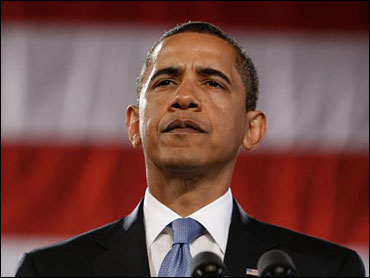 America's old enemies are giving the new president the most trouble. The rise of the Taliban in nuclear-armed Pakistan is the most urgent challenge on his foreign policy agenda, reports CBS News chief foreign affairs correspondent Lara Logan.

Just a month after unveiling a major strategic review, the administration has been forced to rethink that strategy - the gradual approach it had outlined overtaken by the worsening situation in Pakistan. But the president's overtures to the Muslim world have been generally well received in Islamic Pakistan.

"The United States is not at war with Islam," Mr. Obama said.

Tariq Fatimi, former Pakistani Ambassador to the U.S., said he thinks Mr. Obama's message to the world of Islam has been a very positive development.

"Has the change in the United States attitude resulted in any achievements yet?" Logan asked.

"It's still very early, but they are on the right track," Tariq said.

President Obama's been on a global charm offensive in his first 100 days - spending 13 of them on foreign soil, meeting 33 foreign leaders.

In keeping with his promise to reach out to America's enemies, Obama recorded a message for the people of Iran.

But the change in tone has not signaled a change in Iran policy: he's not budging on sanctions or nuclear weapons.

Mr. Obama traveled to Iraq to meet U.S. troops. The recent uptick in violence there could upset his timetable for withdrawing U.S. forces.

"For the next 100 days, it's increasingly going to be a question of really slogging through the hard work of diplomacy," said national security policy expert Michael O'Hanlon.

The president made his future intentions clear when he addressed employees at the CIA.

"I am going to need you more than ever, precisely because we're seeing changes in our foreign policy, and we want to send a new message to the world," the president said.

Nowhere is that message likely to be more severely tested than in the tribal region of Pakistan. The president says that's the most dangerous place in the world for Americans.