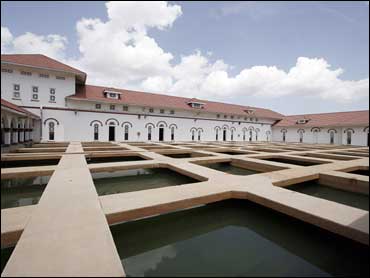 The city's 3,200-mile system of water and sewer lines — old, leaky and in need of improvements long before Hurricane Katrina — was damaged by the torrent of pipe-corroding salt water.

The city Sewerage & Water Board says at least 50 million gallons of water a day are now being lost to leaks, or 2½ times pre-Katrina levels. S&WB officials also believe raw sewage is leaking out in places, though the extent of the problem is unclear.

The larger fear is that if some water pumps fail — whether because of a power outage, some other kind of mechanical trouble, or another Katrina-like storm — a drastic drop in pressure could allow raw sewage or other pollutants to back up into the water system through the leaks. That could contaminate the drinking water in some neighborhoods for days or even weeks.

"We don't have the confidence now to say the system won't fail," S&WB spokesman Robert Jackson said. "We're basically holding it together by tap, by glue, by spit, whatever we can get a hold of."

Two years after Katrina, major breaks are being repaired. But the water system continues to leak, and sewer lines in some areas are dripping, too.

As the city's population continues to grow — it is estimated at 262,000, well below the 455,000 before Katrina — the stress on the system is expected to increase.

But environmentalists are suing the federal government to obtain monitoring data and are calling for an independent study. Some skeptical residents are drinking bottled water.

Patricia Jones, a mother of two who is rebuilding her home in the hard-hit Lower Ninth Ward, said she is spending $80 a month on bottled water because she doesn't trust the city's assurances.

"It's not something I personally prefer to take a risk on," she said.

S&WB estimates that rebuilding and improving the water, sewer and drainage systems will cost $5.7 billion over 25 years, money the agency doesn't have.

The Federal Emergency Management Agency has set aside about $150 million so far and expects to commit tens of millions of dollars more. But the agency won't cover the entire cost; FEMA says that under federal law, it only has to pay to bring the system back up to its pre-Katrina level.

S&WB is acting to raise money on its own, proposing a phased-in increase in water rates that would bring in about $100 million over four years and cause some customers' bills to rise by 80 percent.

Some business owners and residents, burdened since Katrina by higher costs for insurance, electricity and housing, are fighting the proposed increase.

"As long as you can turn the water on and take a bath and flush toilets, people are happy," S&WB general superintendent Joseph Sullivan said.

When Katrina struck on Aug. 29, 2005, 80 percent of New Orleans was inundated. The surge of water caused water, sewer and drainage lines below the streets to shift, loosening joints and causing countless breaks. The salt water also began corroding the steel pipes.

In addition, vibrations from the heavy construction equipment that has been rumbling over New Orleans' cracked and uneven streets since the catastrophe have damaged the pipes even further.

Fixing them will be not only costly but complex, given the miles and miles of underground plumbing. And it will almost certainly require the tearing up of streets throughout the city.

In the 1990s, the sewer system was deemed so poorly maintained that the EPA ordered what amounted to roughly $650 million in improvements. The city was working on that project when Katrina dealt the entire system a setback. The original 2010 deadline is no longer considered feasible.

For much of this year, just two of the three pumps that draw water from the Mississippi River for purification at the city's east bank plant were operating. Officials worried that if one pump failed and water pressure fell sharply, contaminants could enter the drinking water.

To keep the pressure high and offset the water losses, S&WB has been producing more water a day than it was before Katrina, officials say.

The system has been getting by on what S&WB executive director Marcia St. Martin called "day-to-day little miracles."