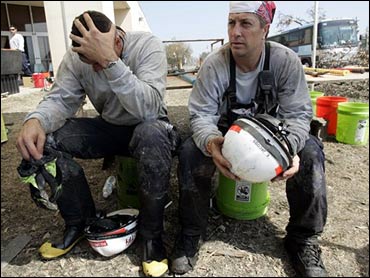 In a grim opening salvo from Hurricane Rita, a steady rain began falling Thursday on New Orleans for the first time since Katrina laid waste to the city, and engineers rushed to shore up the broken levees for fear of another ruinous round of flooding.

The forecast called for 3 to 5 inches of rain in New Orleans in the coming days. That is dangerously close to the amount engineers said could send floodwaters pouring back into neighborhoods that have been dry for less than a week.

There is also the risk that the storm could take a sharper-than-expected turn on its way toward Texas and hit much closer to New Orleans.

He said the forecast brought renewed urgency to efforts to shore up levees with sandbags and bring in more portable pumps. The corps also installed 60-foot sections of metal across some of the city's canals to protect against storm surges.

The showers on Thursday were the first measurable rain in New Orleans since Katrina hit on Aug. 29, broke the levees in several places and flooded 80 percent of the city.

Engineers said the badly damaged levees in New Orleans can handle only up to 6 inches of rain and a storm surge of 10 to 12 feet. In neighboring St. Bernard Parish, a surge of 5 to 6 feet would be all that was needed to swamp the area again.

The lack of rain since Hurricane Katrina ripped through the city more than three weeks ago has been one of the few blessings for New Orleans. On Thursday, relief workers at Mardi Gras World, the city's largest builder of parade floats, handed out free tarpaulins to homeowners to keep Rita's rain from coming through their damaged roofs.

CBS News correspondent Sharyn Alfonsi reports that while forecasters do not think Rita will hit the city head on,

even a glancing blow could swamp it again (video).

The entire Mississippi delta region was under a tropical storm warning. To the west of New Orleans, the storm was expected to bring 15 to 20 inches of rain to southwestern Louisiana. Gov. Kathleen Blanco urged the evacuation of some 500,000 people along the southern edge of the state.

"Rita has Louisiana in her sights," Blanco said. "Head north. You cannot go east, you cannot go west. If you know the local roads that go north, take those."

As for those who refuse to leave, she said: "Perhaps they should write their Social Security numbers on their arms with indelible ink."

"Prepare your family and prepare your house," she warned. "I'm urging Louisiana citizens to take this storm very seriously."

Forecasters said the storm is expected to come ashore on the Texas coast late Friday or early Saturday and turn north along a path not far from the Louisiana state line. For the town of Lake Charles, La., not far from the border, it is a chilling prediction.

"At first, our evacuation orders were just for the low-lying areas, but now it's the entire Calcasieu Parish," said Cindy Murphy, a manager at the police bureau in Lake Charles. "We've got buses running continuously to get residents out. We're trying to learn from other areas, not to repeat their mistakes."

Glynn Stevenson — who swam out of his New Orleans house with belongings taped to his body — had just gotten settled in New Iberia in a trailer provided by the Federal Emergency Management Authority when the call came for him to uproot again.

Katrina's death toll in Louisiana rose to 832 on Thursday, pushing the body count to at least 1,069 across the Gulf Coast. But workers under contract to the state to collect the bodies were taken off the streets of New Orleans because of the approaching storm.

New Orleans Mayor Ray Nagin continued to urge residents to leave. A mandatory evacuation order was in effect for homes on the eastern bank of the Mississippi, and police said people in the city's Algiers section on the other side of the river would be wise to get out, too. But thousands stayed put.

"I'm not going. I'm sticking it out," said Florida Richardson, who was sitting on her front porch in the Algiers Point neighborhood and holding her grandson on her lap. "This house is 85 years old. It's seen a lot of tornadoes and a lot of hurricanes. You can't run from the power of God."

Up the street, Michael Briscoe said: "If you're a true New Orleanian, you've got to go down with the ship. How can you leave?"

In the lower Ninth Ward, where water broke through a levee and caused some of the worst flooding, there was standing water a foot deep in areas that were dry a day earlier. Chad Rachel, a civil engineer with the Army corps, said the water level in the canal was rising and "localized seepage" was inevitable.

"Any drop of rain that falls is going to stay," he said.

At a shelter in Baton Rouge, 75 miles northwest of New Orleans, the topic of the day was Rita and what more rain might do to battered neighborhoods back home. Some evacuees said they could not bear to track Rita's progress.

"Everyone is running from Rita," added Timothy Parker of New Orleans. "I don't watch no TV; it's too depressing. My house is gone and everything. You ain't sorrier than me, you couldn't imagine."