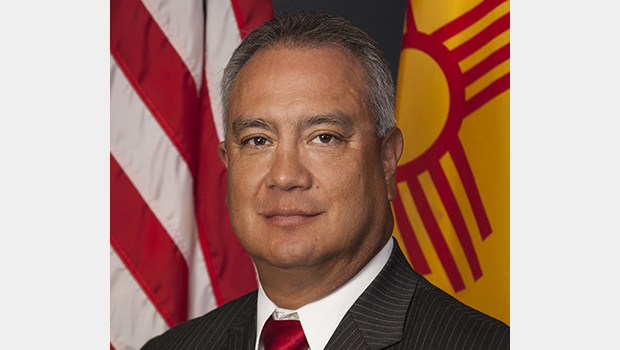 ESPANOLA, N.M. - A northern New Mexico sheriff who refused to resign after being convicted of abusing a driver during a bizarre traffic stop that prosecutors called a fit of road rage was removed Thursday by county officials.

Rio Arriba County commissioners voted 3-0 to oust Sheriff Thomas Rodella, once one of the state's most powerful political figures.

The lawman was found guilty Friday of brandishing a firearm and deprivation of rights following a four-day trial. He faces 17 years in prison over the March encounter, in which he is accused of pulling a gun on Michael Tafoya and striking him in the face with his badge because Tafoya cut him off in traffic. Rodella said Tafoya was a reckless driver that he was trying to stop in the interest of public safety.

James Lujan, a deputy Rodella once fired, was sworn in as the county's new sheriff. Lujan, 52, defeated Rodella in the June Democratic primary for sheriff by 200 votes and was set to take the office since he had no Republican challenger.

Attorney Robert Gorence has said Rodella wouldn't step down and that he plans to appeal the conviction. He didn't immediately respond to an email from The Associated Press seeking comment on the commission's ruling.

A hearing on the petition before First District Court Judge Sheri Raphaelson in Tierra Amarilla isn't scheduled until Oct. 9.

Last year, the FBI searched the sheriff's office to investigate whether his staff accepted donations to a scholarship fund and then looked the other way on donors' traffic offenses. Rodella said the program helped students, and he denied any wrongdoing. No charges were ever filed.