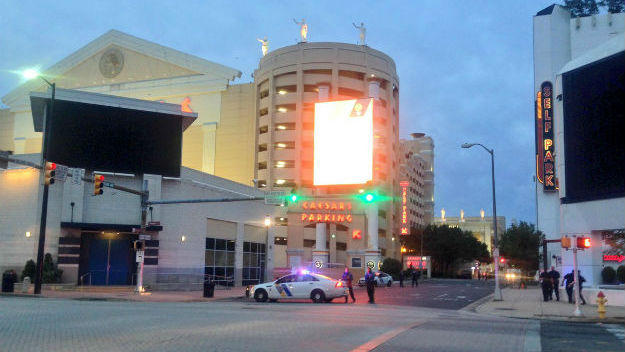 ATLANTIC CITY, N.J. - One police officer remains in critical condition and one suspect is dead in an exchange of gunfire outside an Atlantic City casino early Saturday.

The shooting happened around 2:30 a.m. after two officers saw a robbery being committed near a parking garage at Caesars casino. Two suspects were in custody Saturday night.

Authorities said the officers saw three men trying to rob three others. The wounded officer was shot and injured as he exited his vehicle. The second officer returned fire and struck one of the suspects, who was found dead a short distance away. He was identified as Jerome Damon, 25, of Camden.

Saturday night police arrested Martell Chisholm, 19, of Millville, and Demetrius Cross, 28, of Bridgeton, in connection with the shooting.  Acting Atlantic County Prosecutor Diane Ruberton said they are each being held on two counts of attempted murder, three counts of robbery and weapons offenses. It was not immediately known if they’re represented by lawyers.

The wounded officer, whose name was not released, was taken to nearby AtlantiCare Regional Medical Center. He underwent surgery Saturday morning.

“These are good examples of what happens when too many of these assault weapons are in the wrong hands,” he said.

The shooting happened during the final big summer weekend for the shore resort and two days after a man fatally shot a store manager and then shot himself at a popular outlet shopping mall near where Saturday morning’s shooting occurred.

The shooting also happened as the resort town prepared for the effects of Tropical Storm Hermine, which was expected to start bringing wind and rain later Saturday.