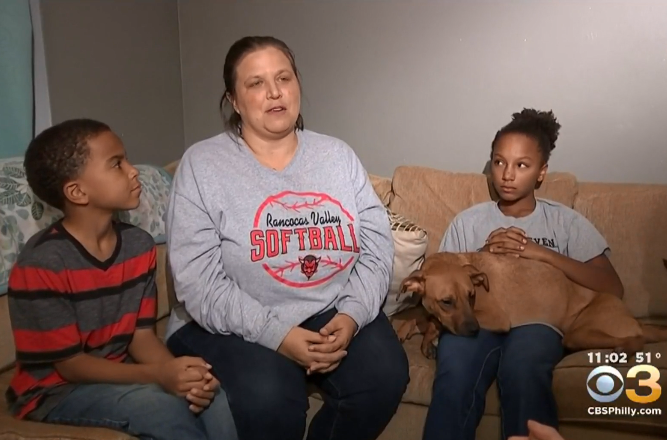 PHILADELPHIA -- A New Jersey mom's gut feeling and her call to police helped stop a school shooting plot hundreds of miles away -- in Kentucky, reports CBS affiliate WKYT and CBS Philly.  Koeberle Bull, a widow and mother of three who lives in Lumberton, New Jersey, never visited Kentucky or even gave it much thought until last Wednesday, when she received a private Facebook message from a man she didn't know.

The message came from a Facebook account with the name Dylan Jarrell. It pictured a gunman gripping a weapon. The message contained crude and racist remarks involving her three children, pictured in her profile picture.

"I hope your black children gets (sic) hung for you being so stupid," the message said.

Jarrell's profile listed him as living in Lawrenceburg, Kentucky. Bull said she has no idea how he found her online, but she decided to call the Lawrenceburg Police Department.

Prompted by Bulls' tip, 20-year-old Jarrell was stopped by Kentucky authorities on Thursday -- just in time, according to investigators.

Police caught up with Jarrell as he was pulling out of his driveway. They said he had a gun, more than 200 rounds of ammunition, a 100-round high capacity magazine, a Kevlar vest and a detailed plan of attack on two school districts -- Anderson County Schools and Shelby County Public Schools, according to WKYT.

In a Friday news conference, Kentucky authorities said tragedy was avoided thanks to a call "from a female in New Jersey."

"Something told me not to let this go," Bull said, with two of her children sitting beside her.

Jarrell was charged with making terroristic threats and harassing communications. He is now behind bars.

For the past three days, Bull has been inundated with messages of gratitude and love sent from strangers in Kentucky.

"The first thing a lot of them say is, 'He does not represent what our community is about'," Bull said at her home Monday evening.